"Randy Savage vs. Ricky Steamboat, WrestleMania 3" has made it to the Finals of the Cageside Seats Greatest Matches Tournament, defeating "CM Punk vs. Samoa Joe, Joe vs. Punk II 2004" to get there.

Share All sharing options for: CSSGMT: 'Randy Savage vs. Ricky Steamboat, WrestleMania 3' advances to the Final

And we have our first finalist in the Cageside Seats Greatest Matches Tournament.

"Randy Savage vs. Ricky Steamboat, WrestleMania 3" scored a 33-17 victory over "CM Punk vs. Samoa Joe, Joe vs. Punk II 2004" in the Final Four round to advance to the finals. 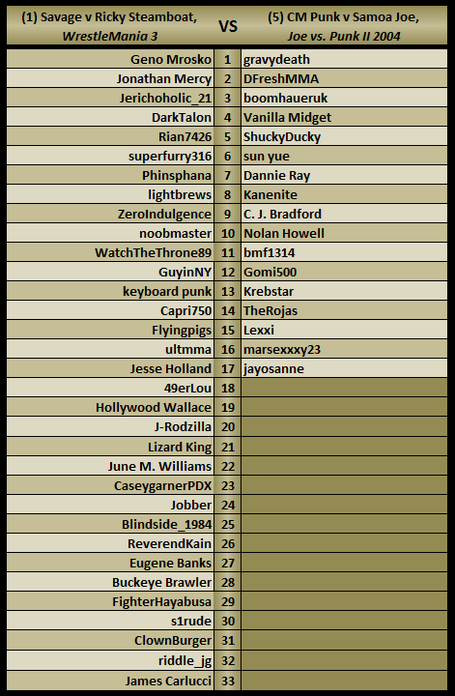 There's actually a chance the winner of the Greatest Wrestler Tournament could find himself in the finals here as well, if "Bret Hart vs. Stone Cold Steve Austin, WrestleMania 13" defeats its Final Four opponent, "Bret Hart vs. British Bulldog, SummerSlam 1992."