The Martial Chronicles: Why MMA's Really Nothing More Than Professional Wrestling

Cageside Guest Columnist John S. Nash brings us another feature edition of his fascinating series chronicling the origins of MMA. This time, we look at the little known fact that mixed martial arts really is professional wrestling.

Share All sharing options for: The Martial Chronicles: Why MMA's Really Nothing More Than Professional Wrestling

This is a revision of an article which was originally cross-posted at the now defunct SBNation Blog, Head Kick Legend by John S. Nash on Dec 29, 2011 [†]

Often, I have been taken aback by the amount of vitriol expressed by many MMA fans whenever the letters WWE, or the words "professional wrestling" come up. While a lack of interest in anything relating to a "staged sport" from a segment of the MMA fan base doesn't surprise me, what does is the outright hostility expressed by many readers. For them, positing any link, no matter how tenuous, between the UFC and the WWF is to defame the sport they love.

As I have tried to chronicle over the last few years, the sport, which would eventually be named "mixed martial arts", is not a recent invention, having been born of two parents over a century ago.

From out of Japan in the East came a number of practitioners of (the often interchangeable) jujutsu and Kodokan Judo, whom travelled extensively throughout the Western World in their quest to spread their art. To assist in this, they quickly began demonstrating the "gentle-ways" effectiveness by challenging and facing, in a variety of matches, the homegrown, Western fighting disciplines of boxing and wrestling.

The West's primary contribution was provided by professional wrestling, which was already staging mixed bouts between the different schools of grappling by the time jujutsu appeared on the European or American landscape. In no time, the two disciplines would be facing off against one another in the ring.

During the early 1900s, numerous contests between jujutsu and wrestling were held. Often, under the old prizefighting rules of "no holds barred", "anything goes" or "all-in". Such rules of wrestling usually stipulated no hold or tactic be banned from use, with a few exceptions, such as biting and gouging (although sometimes even that was allowed). Also often permitted, was the use of punches or kicks.

Eventually, these old rules evolved into an informal set of codified rules where both wrestling and jujutsu techniques were merged into a new style of wrestling, which was sometimes known as "jiu-jitsu wrestling", when a jacket was worn. (Will Bingham and Prof. Takahashi were strong proponents of this style). This style, better known as "all-in" or "Slam Bang Western Style" wrestling, would eventually become the basis for post Great War wrestling.

Unfortunately, it was during the war years that wrestling metamorphosed from a somewhat legitimate sport into a completely staged one. Thus, legitimate professional wrestling and the newly born mixed martial arts were eliminated throughout most of the world in one fell swoop.

Fortunately, it didn't die out completely.

In South America, during the war years, Western wrestlers and Japanese judokas (most notably Matsuyo Maeda) hoping to escape the conflagration in Europe, brought this "anything goes" wrestling with them to the more hospitable lands of Brazil, as part of their traveling shows.

These matches found some popularity in Rio de Janeiro, São Paolo and the state of Bahia, becoming known as vale tudo (which translates as "anything goes" in Portuguese), eventually being televised on "Heróis do Ringue" in 1959 and 1960.

This widespread popularity wouldn't last, being deemed too brutal for the masses, but would continue to be practiced as a fringe "sport" in Rio and the northern and southern regions of Brazil.

It was a Gracie, Rorion, who would bring this (at least real and not staged) "anything goes" wrestling back to the United States on November 12, 1993, with the first Ultimate Fighting Championship. 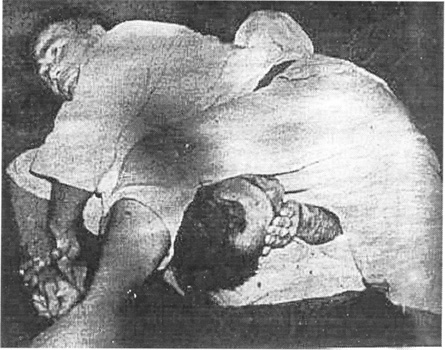 Kimura applying his namesake on Hélio | Image via moscow.kyokushinkai.ru

America was not the only place seeing a revival in "real" professional wrestling that year, for a month earlier in Japan, Masakatsu Funaki's "Pancrase" held their first event, one where matches would be contested without predetermined outcomes.

Puroresu in Japan, while having been as staged (staged being the correct term, as opposed to fake, when discussing the Japanese or pre-1980s American wrestling scenes) as their Western counterparts, was far more obsessed with keeping the illusion of reality alive.

Perhaps inspired by the "Heróis do Ringue" program (which aired in Brazil while he resided there as a youth), puroresu's top star, Antonio Inoki, even went so far as to "prove" its superiority to other fighting disciplines by bringing in practiced catch-as-catch-can wrestlers, such as Karl Gotch and Billy Robinson, to ensure the Japanese wrestlers could deliver a realistic performance.

Eventually, a group of young wrestlers led by Masakatsu Funaki, Minoru Suzuki, and Ken Shamrock, tired of only practicing, and decided to finally compete for real. They did so under the rules of professional wrestling, rules which allowed contestants to use painful submission grappling techniques and strikes (although, only with open hands to the head). These rules had changed very little from the time of the "wrestling versus jujutsu" contests held at the beginning of the century.

A year after that first Pancrase show, the "Vale Tudo Japan tournament" kicked off. Shortly thereafter, other real professional wrestling promotions, such as Shooto, RINGS, and PRIDE FC followed, kicking off the era of sōgōkakutōgi in Japan. During this era very little was done to differentiate between MMA and puroresu.

In the United States, the UFC too gave birth to other fighting promotions. Unable to use the name Ultimate Fighting, and apparently unaware of (or unwilling to) highlight its direct lineage to professional wrestling, they would take to calling the sport "No Rules" and "No Holds Barred" fighting until either Jeff Blatnick and John McCarthy, or Rick Blume, would coin the term "mixed martial arts".

The name would soon become the acknowledged name for not only the "no rules" fighting of that time, but also the modified professional wrestling matches taking place in Japan, as well as later events held under the Unified Rules.

In fact, when the UFC and other MMA promotions were trying to move away from the "human cockfighting" image the sport had gained, and began to enforce new rules; they turned to the Japanese promotions for some of their inspiration.

Thus, the current UFC, as fought under the Unified Rules, is descended from Japanese promotions of the 90s and the "anything goes" vale tudo of Brazil.

Moreover, we didn't even have to touch on the fact the UFC has built its business completely off the back of pro wrestling and pro wrestling fans.

† -- This revised article by our guest columnist John S. Nash has been 'crossposted' to Cagesideseats.com today (Nov. 06, 2012). In addition to delving into wrestling's past for Cageside Seats, Mr. Nash has regularly chronicled the forgotten history of mixed martial arts at our fellow SBNation Blog: BloodyElbow.com, and the now defunct Head Kick Legend blog, where this article was posted in it's original form back on Dec 29, 2011. Cageside Seats is proud to feature the cross-posting of his entire archive of articles in this exclusive guest column for your enjoyment. To read more fascinating articles from Mr. Nash, simply bookmark this link and remember to check back frequently for new content.