Share All sharing options for: The Martial Chronicles: Origins of Mixed Martial Arts - The Brazilian Connection

This is a revision of an article which was originally posted at the now defunct SBNation Blog, Head Kick Legend by John S. Nash on April 4, 2012 [†]

If there is one aspect of boxing for which fans of mixed martial arts can be forgiven for envying, it is the long and rich history boxing holds over its sporting sibling.

Theirs is a tradition which regales us with the exploits of Hank Armstrong, Joe Louis, Willie Pep, and Sugar Ray Robinson, and recalls the glories of "The War", "The Fight of the Century", "The Rumble in the Jungle", and "The Long Count", while tracing the lineage of the heavyweight title from Wladimir Klitschko today, all the way back to 1729, where James Figg, the recognized father of boxing, was the first man to ever be crowned champion.

In comparison, the history of mixed martial arts is practically nonexistent - its date of birth not three centuries past, but less than two decades ago.

The most widely accepted and commonly told story for the origins of mixed martial arts is that it was introduced to the world on November 12, 1993, when Gerard Gordeau stepped into the cage against Teila Tuli at the very first Ultimate Fighting Championship.

As this version of the story goes, thanks to an inspired Rorion Gracie and Art Davies, for the first time - or at least the first time in modernity - two disparate styles of martial arts were pitted against one another in a contest of unarmed combat that allowed for both grappling and striking, and where victory could be attained by either rendering your opponent unconscious through blows or by forcing them to surrender from a submission hold.

The sport invented that day was originally referred to as "no holds barred" (since the phrase "mixed martial arts" or "MMA" wouldn't be coined until 1995), and was fought practically without any rules. This initial no rules environment soon gave way to the Unified rules, a transformation not unlike that seen in boxing when London Prizefighting gave way to the Marquis of Queensbury rules.

That this creation myth for MMA would prove not to be completely accurate should come as no surprise, for when one uses the definition given above, it becomes obvious that the Ultimate Fighting Championship event where Royce shocked the world was not where modern mixed martial arts was born after all. The sport had actually been in existence for some time before then. 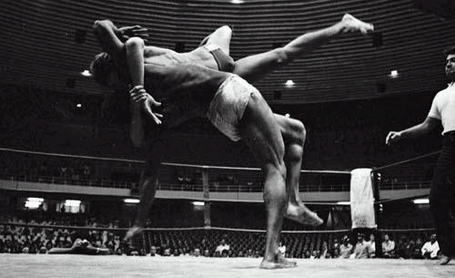 It turns out, we can find several examples throughout history of what can easily be labeled as mixed martial arts. Such examples include "rough-and-tumble" fighting of the American frontiers, the early pugilism of James Figg, and most famously, the pancration of the ancient Greeks, an original Olympic sport that combined boxing and wrestling, and which called for competitors to win by pummeling or grappling their opponent into submission.

What was introduced at the Ultimate Fighting Championship was not a new sport, but merely the renaming of a pre-existing one: vale tudo, which translates as Portuguese for "anything goes". Vale tudo was and continues to be a combative sport with a tradition that goes back for years in its native Brazil. During its most popular periods, vale tudo fights would be held before teeming stadium crowds and broadcast on national television. It was also, with the exception of the Octagon cage, indistinguishable from those early UFC fights. [EN1]

By the time of UFC 1, vale tudo contests had been taking place for decades in Brazil, with its most storied fighter being Rorion's father Helio, often credited as the originator of both vale tudo and mixed fighting. While this is for the most part more of the "Gracie myth", there is a kernel of truth in it, for Helio participated in a fight that may have been the first to ever be publicly billed as a "vale tudo" match. 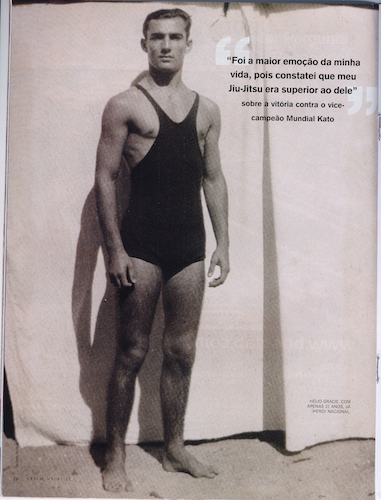 In February of 1935, a 22-year-old Helio faced off against Orlando Americo da Silva, better known as Dudu the Brazilian Luta-Livre champion. Dudu had originally been booked a couple of months earlier against Helio's brother, George Gracie, in a luta livre grappling contest (Brazilian catch-as-catch-can), but George refused to fight when Dudu and the referee insisted upon allowing forearm blows. Seeing an opportunity to reaffirm the superiority of his own brand of Jiu-Jitsu (George was feuding with his brothers at the time), Carlos issued a challenge on behalf of his younger brother Helio against the "giant" Dudu.

The "grudge match" was held inside a boxing ring at the Estadio Brasil, and was set to be for no more than five 20 minute rounds with only hair-pulling, eye-gouging, and groin attacks banned. It began with the 66 kg Helio throwing a front kick to the 88 kg Dudu's face, knocking out two of his teeth. Dudu countered by immediately taking Helio down, who fought back ferociously with punches, knees, and elbows. A bloodied Dudu retaliated with head-butts, breaking Helio's nose. Eventually the two returned to their feet, where Helio was able to catch his opponent with a kick to the body, breaking two of Dudu's ribs and forcing him to concede the match after 19 minutes of brutal action. Dudu was reported to have urinated blood afterwards. [EN2] 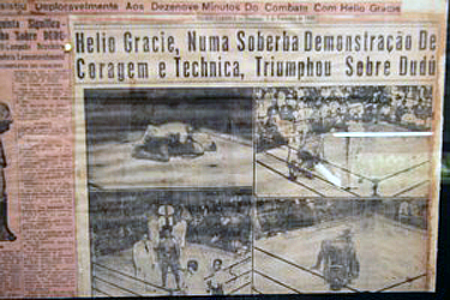 While this contest may have been the first legitimate prizefight to be called "vale tudo", it was not the first "anything goes" mixed fight to take place in Brazil. Nor was it even young Helio's first such match. [EN3]

Helio's first professional prizefight was at an event promoted by his brother Carlos, at the Coliseo Internacional in Rio de Janeiro, on January 16, 1932. It was an evening of boxing vs. jiu-jitsu matches, billed as "Lutas Mistas" (which translates to"Mixed Fight"), in which the competitors wore four-ounce gloves. Headlined by the Japanese jiu-jitsu fighter Geo Omori who would battle the pugilist and wrestler Taveres Crespo, the card featured a skinny 19-year-old Helio fighting on the preliminaries against the boxer Antonio Portugal. Helio took down Portugal and submitted him by armbar inside of one minute. [EN4]

Even this was by no means the first such mixed fight held in Brazil, which was experiencing something of a prizefighting craze at this time. Mark Hewitt described this fight scene in his book, Catch Wrestling: Round Two,

"By the late 1920s and early 1930s, there was a lively professional combat sports circuit flourishing in Brazil. Contests were held under various styles including boxing, jiu-jitsu, capoeira, and both luta livre and luta Romana styles of wrestling. Luta Romana was the same as Greco-Roman wrestling, while luta livre was the Brazilian version of catch-as-catch-can with more of an emphasis on winning by submission rather than a pinfall. Occasionally, special mixed matches, pitting one stylist against another were held. This usually involved a jiu-jitsu export facing a boxer, a wrestler, or a capoeirista."

Joao Baldi, Tico Soledade, Jayme Martins Ferreira, Roberto Ruhman, Omori , Crespo, Dudu, and Helio's older brothers Carlos, Oswald, and George all rose to prominence competing in these mixed matches, many of which were held under "anything goes" rules. One example of such a contest involved an unnamed Japanese fighter (most likely Geo Omori) and a large Bahaian in San Paulo in 1928,

"The fight was important, not because the contestants were famous, but because they used different and interesting styles of wrestling. The Bahian lout fought after the manner of Brazilian capoeira. This is the national style of fighting; it includes blows as well as grips" ..."after putting the Japanese on his back and trying to kick his head... the little oriental by the use of a Jiu Jitsu hold threw the Bahian and after a short struggle he was found sitting on the silent frame of the massive opponent." [EN5]

The newspaper accounts could just as easily be describing a contest held some 75 years later between Anderson Silva and Daijyu Takase at Pride 26. This leads us to ask, "Is there any reason to differentiate this match from later mixed martial arts contests?"

The very first mixed fight contest in Brazil can be traced back to a match between a Japanese jiu-jitsu fighter named Miyako and a capoeirista named Cyriac in Rio de Janeiro in 1909. [EN6] But this contest, which contained all the elements that would later become identified with mixed martial arts (two different styles, the allowance for grappling and striking), was a one off affair. For the actual beginnings of the mixed style fight in Brazil, we need to look a few years later during the time of the First World War in Europe.

It was then, when a group of traveling Japanese prizefighters arrived in Brazil issuing challenges to "take on all comers", challenges that were not only accepted by local wrestlers, boxers, and capoeiristas, but also lit the spark which eventually became vale tudo, Mista Luta, anything goes, no holds barred, mixed martial arts, or whatever you wish to call it. 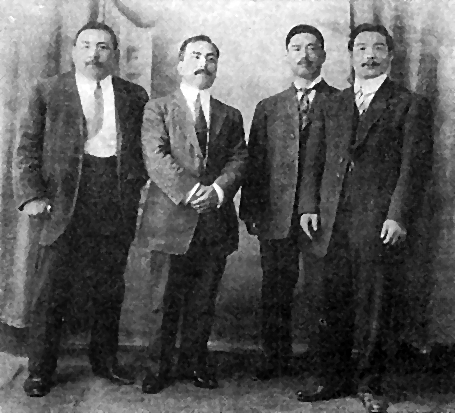 Amongst these founding fathers of Brazilian MMA, were the Judokas Matsuyo Maeda, Soishiro Satake, and Tokoguro Ito, friends and former members of the Kodokan, who had all been traveling the professional fight circuit off-and-on together for years.

Satake might hold the honor of being the member of their troupe to participate in the first such "anything goes" mixed fight in Brazil, when he faced and defeated the capoeirista Pé de Bol on November 7th, 1915. While this fight was preceded by Cyriac's and Miyako's contest, the Bol/Satake fight should probably be remembered as the match that ushered in vale tudo to Brazil for it was soon followed by similar fights by his fellow Japanese prizefighters. Even more importantly, this practice was continued by their students and the various circus promoters they had worked with and introduced the idea to.

So then, is this the origin for mixed martial arts? In Brazil, most likely, but a contemporary newspaper account of a match between Tokoguro Ito and the wrestler Eddie Robinson suggests the answer to the global birthplace lies elsewhere:

"Robinson started out by jabbing Ito three times straight in the face... Before the first bout was two minutes old, blood was flowing from Ito's nose...  Ito locked his legs around the white man and began to 'scissor' him. Next he got a strangle hold, using Robinson's neck cloth as a tourniquet, and slowly forced the American into submission by the process of strangulation." [EN7]

That match took place in Seattle, Washington in 1909. And it is in the United States that we'll find the answer to our question. But that is a story for another time...

† -- This article by our guest columnist John S. Nash has been 'crossposted' to Cagesideseats.com today (Nov. 02, 2012). In addition to delving into wrestling's past for Cageside Seats, Mr. Nash has regularly chronicled the forgotten history of mixed martial arts at our fellow SBNation Blog: BloodyElbow.com, and the now defunct "Head Kick Legend", where this article was also posted back on April, 4, 2012. Cageside Seats is proud to present the cross-posting of his entire archive of articles in this exclusive guest column for your enjoyment. To read more fascinating articles from Mr. Nash, simply bookmark this link and remember to check back frequently for new content.

EN 3: I describe a few of Helio's other contests from this time in The Martial Chronicles: Tonight in Strikeforce Roger Gracie Continues the Family Tradition by Facing King Mo