WWE Raw: CM Punk hits John Laurinaitis with the GTS ... and creates the photo of the year in the process

Share All sharing options for: WWE Raw: CM Punk hits John Laurinaitis with the GTS ... and creates the photo of the year in the process

On tonight's (Jan. 23, 2012) episode of Monday Night Raw, WWE finally paid off the tease of CM Punk physically assaulting John Laurinaitis to close the show. After Johnny Ace reached out to shake hands, Punk grabbed him and delivered the GTS.

And created the photo of the year in the process.

As you can see above, Laurinaitis completely forgot to sell the fact that he was about to get put to sleep and held on Punk's shoulders with the most stoic look I've ever seen in my life.

In fact if you rotate the photo to where Laurinaitis is upright, it almost appears as though he's seen a speck of something on the floor and he's intently trying to figure out what it is before Punk finishes the move.

It's somewhat surprising that WWE decided to let these two have their first physical confrontation before the big pay-per-view this Sunday night but that was likely by design and a way to promote the Royal Rumble event, thanks to the previous set up of Laurinaitis facing an evaluation on Raw next week. In that regard, did it do its job and make you want to buy the show even more? Or was it the wrong move?

For complete Raw results and the running live blog click here. Check out another good pic after the jump. 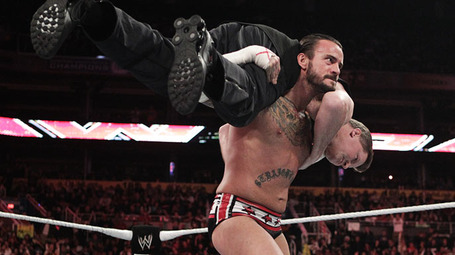