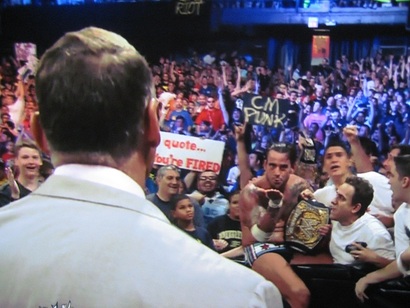 The stars aligned in Chicago tonight, where WWE Money in the Bank 2011 surely became one of the greatest events in recent WWE history, and most likely, the history of sports entertainment altogether.  Each and every match delivered, it was rarely predictable, and if it was, it presented itself in a manner that retained every ounce of excitement.  I can honestly tell you, that as a fan who grew up watching legends like Hulk Hogan, and was lucky enough to be along for the wild ride that was the "Attitude Era", I've never seen a WWE PPV that delivered like tonight did.  If you for some reason missed this show, stop reading this now, and go watch.  If you missed something, go watch.  If you're a fan of wrestling, go watch again.  Tonight, as it was hyped in the lead up, may very well have changed the landscape of professional wrestling.

I won't pretend to be a seasoned writer in regards to professional wrestling, I'm about as far from it as you can get.  I've done some incredibly fun liveblogs, and have watched wrestling programming religiously again since joining up here at Cageside.  I'm saying all this to say, that regardless of whether you're as casual as it gets, a former fan who dislikes the current product, or a dedicated fan of today's business, this show will appeal to you.  This had the feeling of a "big fight" that you'd get in boxing.  There's only a handful of fights that have had me this excited, and this is wrestling.  I'll repeat that.  This is wrestling.  This atmosphere is wrestling, and I hope it sticks.  The WWE pulls the strings, and the ball is always in their court to give fans what they desire, and tonight, after missing the mark with many fans, they hit this one out of the park.  Let's take a look at this memorable night match by match.

Smackdown Money in the Bank:

Quite a few fans wanted to see the young and talented Daniel Bryan win the Smackdown Money in the Bank match, but everyone know it was wishful thinking.  After a well plotted and executed match that saw plenty of fun spots, and lots of drama, Daniel Bryan's persistence paid off.  After being thrown from the ladder time and time again, Bryan finally stood atop the ladder, sending Wade Barrett crashing to the mat with a great head kick.  He snatched the briefcase, and the crowd chanted his name.  The underdog won in impressive fashion, taking out favorites Wade Barrett and Sheamus in the process.  With booking like this, some wondered if the night would continue to follow this path, even claiming, "Paul Heyman must be booking this!"

After the jump, we break down the rest of the card!  While you've got your clicker ready, why not give us a follow on Twitter @cagesideseats?

Kelly Kelly vs. Brie Bella for the WWE Divas Championship:

Kelly Kelly successfully defended her Divas title against Brie Bella in a straightforward divas match with lots of yelling and screeching.  Wish I could say more, but the positive thing to take away here is that the match went off without a hitch, and one of the most popular divas (barring Randy Orton's opinion) retained the championship.

If you're the kind of fan who knows what you're gonna get with the big men, then you should be pleased with this match as well.  After attacking Big Show's bad leg, Mark Henry demolished Show, and after getting the pin, crushed the bad leg with a steel chair, and left Show to be carted off by the medical team.  Henry's heel run has been pretty good up to this point, there's honestly no reason he shouldn't be mixing it up with other superstars on the Smackdown roster, and expanding on his badass, angry attitude.

Raw Money in the Bank:

Alberto Del Rio, the favorite to win the Raw Money in the Bank match, overcame stiff competition en route to earning his briefcase.  The high flyers took center stage, with Rey Mysterio, Evan Bourne, and Kofi Kingston all looking phenomenal in some breathtaking spots.  Even the village idi-...loon...R-Truth get in on some high flying action.  The Miz was ejected from the match midway due to a hurt knee, but made a last ditch effort to climb the ladder, running from the backstage area only to fail in his last climb of the ladder.  Evan Bourne was dethroned from atop the ladder by Rey, who then battled it out with Del Rio for the briefcase.  This led to one of the best botches in recent memory, where Del Rio tossed Rey on to a different ladder, and Rey was selling, but his ladder fell into Del Rio's knocking them both to the mat.  Del Rio fell onto a stack of ladders, and in a fit, ripped Rey's mask off, reset his ladder, and grabbed the briefcase.

Also, Jack Swagger nearly broke his arm...leg...face...whole body while falling from a ladder, as he fell off of the ladder while the ladder was falling into the ropes.  Luckily, he looked fine.

Randy Orton vs. Christian for the WWE World Heavyweight Championship:

The DQ stipulation being waived in this match was the deciding factor, with a back and forth affair ending when Christian spat in Orton's mouth, and Orton unleashed hell on him.  After pounding away on his skull, Orton kicked Christian square in the goods, and was disqualified.  Orton then went into full Viper rage, beating down Christian, and hitting him with the RKO on top of a table not once, but twice.  The match delivered, with plenty of near falls, and reversals.  These two work well together, but the story might need a little bit of flare if they want to continue.

Maybe to spice things up, Christian could be nursing an "injury" to avoid wrestling Orton, and eventually force Teddy Long to hold a tournament to see who the next number one contender is.  That could really play up Christian's current heel run, make him out to be a sissy who doesn't want to risk losing his title, and build up a (possibly) new challenger for the title.  There's plenty of options, and Daniel Bryan has his MITB briefcase as well.

John Cena vs. CM Punk for the WWE Championship:

Check this snippet from our Money in the Bank Liveblog:

The crowd is absolutely WILD for CM Punk.  He's wearing a brand new shirt "CM Punk" on the front, "Best in the World" with today's date on the back.  After his entrance, he sits in the ring, the crowd starts to calm, he stands and drives them wild again, the crowd is chanting CM Punk while Cena is ready to enter.  Punk looks so into this moment.  Cena's music hits, and the loudest boos I've heard for a face EVER ring out in the arena.  No running to the ring for Mr. Cena tonight.  Punk paces outside of the ring.

The words don't describe how hot the crowd was.  They had waited all night to let out these cheers and boos and they were BOOMING!  The match was quite good, with more near falls, reversals, and false finishes than I remember seeing in a long, long time.  There were plenty of times where I thought Cena was about to win clean, and make Punk tap.  There were classic moments, some missed spots, but overall, this match was made by the atmosphere.  It was truly "must see".  The hype goggles were on, and in full effect.

With Vince McMahon heading to the ring with John Laurinaitis, Cena was looking to make Punk tap.  Vince called for the bell to be rung, and Cena jumped out of the ring, and as Laurinaitis was running to the bell, Cena clocked him, putting him out.  From there, Cena stared down Vince, and returned to the ring, only to be hit with the Go to Sleep by Punk, and pinned for the win.  The crowd went wild, Punk looked sly as a fox, grinning from ear to ear.  Vince jumped on a headset and called for Del Rio to run out and cash in his MITB case.  Del Rio ran for the ring, only to be laid out by a brutal Punk kick, or knee...I was too busy losing my mind on my couch to discern the movements of a human body.

Punk darted into the crowd with the belt, blew Vinny Mac a kiss, and left the arena.  The last thing we see is a shell shocked Vince McMahon.  What happens now is anyone's guess.  I'm confident that whatever happens, the WWE has this on lock down.  They KNOW CM Punk is the hottest name in the business, and the hype he has now is enough to truly be a game changer.  We'll be right here tomorrow night with our Raw Liveblog, anxiously awaiting the next step of this incredible angle.

Post-event note:  Word is that Vince McMahon punched out Laurinaitis when they made it back stage.  Bad night for Johnny.