MMA Is Trying To Get Me Divorced!!

Share All sharing options for: MMA Is Trying To Get Me Divorced!! 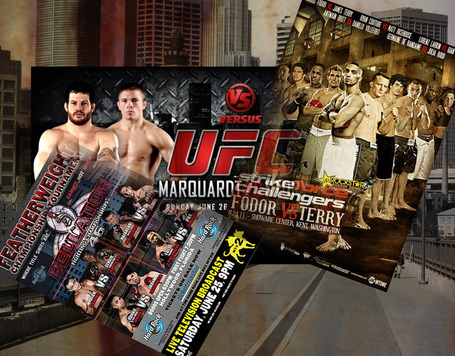 As an MMA writer/fan/addict, I live for the sport of mixed martial arts. I make it a point to watch every televised event, and try to write about as much of it as I can.

If I weren't married, all of the aforementioned would comprise my daily schedule. But I am married. I like sleeping in my bed. Shoot, I actually even kinda like my wife. Because of this, I try to balance my manic obsession with MMA, and do "married things" as often as possible.

When there is one live event every couple of weeks or so, the balancing act is manageable. This weekend, I will have to dig deep into the excess of brownie points I've accumulated, and will probably find myself in a position where I'll need to earn some more come next Monday.

Why? You may be unaware, but this upcoming weekend is chalk full of entertaining fight cards. Here's the full run-down:

On Friday night, Strikeforce will return to the 'Challengers' series. The event will be held at the ShoWare Center in Kent, Washington, and begins at 11pm ET on Showtime. Here's the card for the event:

On Saturday night, Bellator returns to action (after a 4+ week lay-off) with Bellator 46. The fights will take place at the Seminole Hard Rock Hotel & Casino in Hollywood, Florida. The televised fights begin at 9pm ET on MTV2. Here's the lineup for this one:

On Sunday night, the UFC will host its "UFC Live: Marquardt vs. Story" event from the Consol Energy Center in Pittsburgh, Pennsylvania. The preliminiary card is said to be airing via Facebook, and are set to being at 4:55pm ET. The main card will air on Versus, and begins at 9pm ET. Here's the entire card:

So there it is. It's fantastic news, and it's terrible news, all at the same time. Does anyone else share my predicament? Any fellow potential "couch-sleepers" as the weekend approaches?