Share All sharing options for: UFC 130: Live Results and Discussion 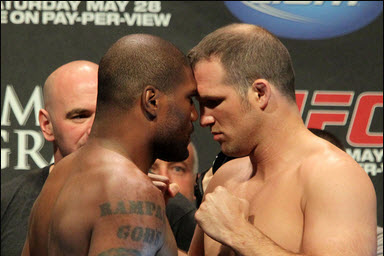 Join us here at Cageside Seats tonight at 9 p.m. ET for live results and discussion of UFC 130: Rampage vs. Hamill.  The above fight card will be updated live (and include the undercard results since they're all available to be watched live), and play by play will be after the jump.  Chime in in our comment section and let us know your thoughts on the fights as they take place.

There was a Brock Lesnar update before the Spike TV broadcast ended, he's had surgery, which was a success and is now recovering, it is expected that he will return to MMA action.  Good news.  We're just moments away from the PPV broadcast.

Round 1 -  A one sided beating from Stann, the first half of the round was a feeling out period, with leg kicks being exchanged and flurries from both men.  Just under two minutes left in the round, Stann dropped Santiago, and pounced on him while he was down.  All the way to the end of the round, Stann dropped bombs, as well as sharp elbows.  With 10 seconds left, Santiago stood and got away.  10-9 Stann

Round 2 -  The round was once again all Stann, who was able to land beautiful power punches by throwing punches in bunches, ending with the power shot.  Stann began to vary his attack, landing some nice kicks to the body, as well as a nasty uppercut counter, Santiago remained game, landing a solid spinning backfist of his own.  But it was towards the end of the round that Stann was able to put the hurt on Santiago, when an overhand right dropped Santiago, and multiple punches from above forced referee Herb Dean to call for the stoppage.  Stann is making quite the case for himself at middleweight.

As they pan the crowd, I catch a fat guy throwing up the shocker.  Awesome crowd this memorial day weekend.  The promo for Alves/Story is running with "Unstoppable force vs. Immovable object"...hehe.

Round 1 -  Story was just all over Alves, dominating him in the clinch with his strength and wrestling.  Very much like Jon Fitch did.  Alves was never allowed to really get off, and if that wasn't bad enough, Story was landing some serious punches.  Just no respect for Alves' game, and it's paid off.  10-9 Story

Round 2 -  More of the same early on, Alves looking more and more desperate as time rolls on.  Alves landed a take down of his own, but it wasn't but seconds later that Story reversed the position, and it was business as usual.  Interesting to note that Story's corner believes that Alves is going to break, and it's starting to look like that will be the case.  The third round will be very telling for where Alves is at mentally in this fight.  10-9 Story

Round 3 -  A jarring knee by Alves early led to a first half that saw Alves landing some solid punches, maybe because Story was hurt, maybe because he's finally tired.  Story showed a great jaw, taking punches that would put down lesser men.  Alves was finally able to shake Story off in the clinch, and won exchange after exchange, landing punches that surprisingly didn't drop Story.  With 30 seconds left, Alves tried to land big shots, a head kick, and knees to the head, but nothing put Story away.  The fight came to a close with both men winging punches at one another.  10-9 Alves

Round 1 -  Early on, the kickboxing exchanges were relatively even, Struve looking to have tightened up his game.  Browne scored a takedown, but couldn't do anything from top control.  Struve threatened with multiple chokes as he looked to get to his feet, but couldn't lock it in.  As they returned to their feet, Browne started to rush in and find Struve's chin.  Then, out of nowhere, Brown landed a massive superman punch to the chin, and Struve crumbled, out cold.  That was a nasty beautiful disaster of a punch.

Round 1 -  What a first round!  Both men were throwing with bad intentions from the first bell and on.  Nelson looked to make Mir carry his weight against the cage, while working dirty boxing.  When distance was created, Nelson was throwing a bomb of a right hand, while Mir poured on knees to the head again and again.  Mir landed a slick throw, and looked to work from Nelson's back, but Nelson made his way back to his feet.  10-9 Mir

Round 2 -  Frank Mir took the round once again, working from top control as well as winning the clinch battle.  Nelson wasn't without his moments though, landing the occasional powerful right hand.  Nelson looks absolutely exhausted at the end of the round, Mir looks a bit winded, but not nearly as bad as Nelson.  10-9 Mir

Round 3 -  Mir put more focus on the wrestling and ground game in the final round, Roy showed heart finding his way to the feet time and time again, but it was all Mir.  The most significant moments of the round had to be the massive elbows Mir landed around the 1 minute mark, where Nelson took the full force of the attack right on the face.  Even that couldn't take Nelson out of the fight though. 10-9 Mir

Round 1 -  Jackson looks damn good tonight.  Hamill looking for a lot of kicks, to the head as well as the legs.  The only thing landing often for Hamill is the outside leg kick.  He's reaching with his punches, Rampage making him pay with counters.  Not one take down is secured by Hamill, Rampage stuffing all of them.  10-9 Rampage

Round 2 -  Hamill accomplished even less in this round, nothing more than a few kicks land for him, while Rampage is loose, and flowing.  Rampage beginning to wail on the body, as well as land knees to the body.  Bad fight for Hamill.  10-9 Rampage

Round 3 -  Jackson has slowed down considerably, but this fight is all his.  Hamill has nothing for him, but Rampage cannot finish, nor does he looked too bothered to really go after him.  Meh. 10-9 Rampage