UFC 130 Fight Card: Who's Fighting, How to Watch, and is it Worth Buying?

Share All sharing options for: UFC 130 Fight Card: Who's Fighting, How to Watch, and is it Worth Buying? 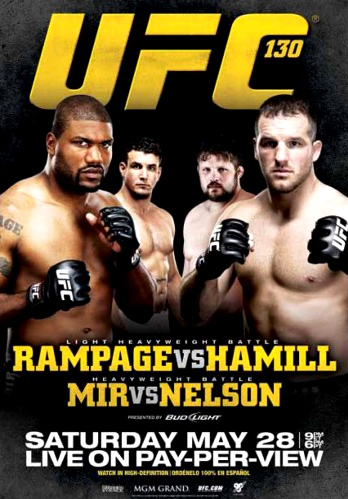 In my time being a "hardcore" mixed martial arts fan, I've found three particular questions are asked by casual fans consistently. Who's fighting? How can I watch it? Is it worth buying? All three very valid questions, and seeing as here at Cageside Seats we have quite a bit of casual fans who regularly visit, being pro wrestling fans who dabble in MMA when it's worth their time and money, it's fitting that we regularly answer these questions before every major MMA event. With the variety of fighters in the UFC, it gets hard to keep up with some of your favorite fighter's schedules. On top of that, free preliminary fights are aired on Facebook, Spike TV, and now Ion TV...but not for every event. This is your one stop guide for the big three questions, now, let's get some answers.

This card, like many before it, has suffered from the main event being cancelled or switched with little time to find a proper main event replacement. Originally, Frankie Edgar vs. Gray Maynard III was supposed to headline, a rematch from their lightweight title fight on New Years Day. Should that fight have stayed on the card, this would be a quick "yes". If you saw their most recent fight, you know it was (and still is) likely to be fight of the year. Alas, it's not happening, and now the card is headlined by the original co-main event, Quinton Jackson vs. Matt Hamill.

Although the first three fights on the main card are mildly intriguing, and the two marquee bouts are definitely worth watching, there's nothing that jumps out at me enough to shell out the full PPV price for the card. That said, just because you don't buy the PPV doesn't mean you shouldn't watch it. All five fights should prove to be at least interesting, and I suspect that a few may even really stand out, so if you're going to the bar, or having a UFC party with friends who help pay, you're set.

UFC 130 is being live blogged right here at Cageside Seats tonight, join us for updated live results of the event, and discussion on all the fights taking place!