Steven Seagal: Inventor of the Front Kick and Time Machine

Share All sharing options for: Steven Seagal: Inventor of the Front Kick and Time Machine

Following Anderson Silva's epic knock out victory over Vitor Belfort at UFC 126, the media was buzzing about the fantastic kick that lead to the finish. Fans around the world were in awe as Silva lifted his left leg, and extended his foot to the jaw of his challenger, dropping him as a result. During the post-fight press conference Silva made the startling statement that action film star, and seventh degree Aikido black belt, Steven Seagal helped him perfect the kick.

In the following video, Seagal takes credit for inventing the kick, and teaching it to Anderson Silva:

I'm thoroughly convinced that Steven Seagal is the inventor of not only the lethal high front kick, but the inventor of a time machine.  No ladies and gentlemen this is not science fiction, this is reality!  After the jump, we hear from Seagal's mouth when he started working with Silva, and point to irrefutable evidence that Seagal does, in fact, have a time machine.

First, Seagal states that he's worked with Anderson Silva for a year and a half or so.  The video mentioned was in filmed during the lead up to Silva's title defense against Chael Sonnen.  This is important to keep in mind.  This quote though, I found interesting:

I don't really keep track of space and time...

Why space AND time? I'll tell you why, because he has a time machine!  Now, on to the destruction of the idea that Seagal taught Anderson Silva this kick.

Here, is the final moment of Silva vs. Belfort: 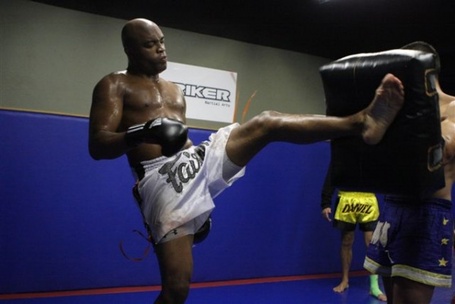 This photo comes via Sherdog's UFC 97 training pictures with Anderson Silva, putting the photo's date somewhere in early 2009. Although not quite as high as the chin, this is the same kick as the one that ended Vitor Belfort's night at UFC 126.  Note the placement of Silva's arms.  The left is pointed down, while the right sits at a 90 degree angle. 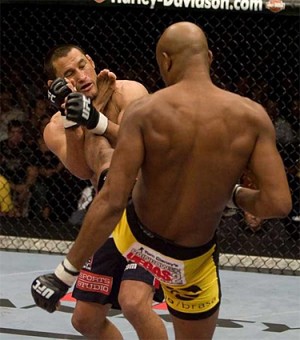 From UFC 82, which took place the night of March 1st, 2008. The exact same kick. Arm placement is exactly the same, and it lands just south of Dan Henderson's chin. The only logical explanation for this, is that Seagal has traveled through time, teaching, and in the champion's own words, "perfecting" this destructive kick. If Seagal did not travel through time, how is it that the kick is identical to the kick that Silva was throwing prior to ever even meeting Seagal, what is it that indicates any sort of "perfecting" of the kick other than simply raising it a few centimeters and actually hitting the target?  There is no indication of further "perfecting" thus, the training happened prior to any of these events, in meetings between Seagal and Silva long before their official "meeting".

Now that Seagal has been outed as the creator of the time machine, one has to wonder what other fine martial artists he can credit with teaching his exclusive maneuvers.  I'm sure after mainstream media picks up this story, Seagal will come forward, announcing that he in fact taught Muhammad Ali how to throw that quick, left hand that he continuously frustrated his opponents with, claiming it was a variation of a move called the "jab" that was taught to him "30 or 40 years ago".  He'll also then claim that Jeet Kune Do was actually taught to Bruce Lee, by him, and he gave him his blessing to coin it as his own martial art.

One can on imagine what the future, and past, hold for Steven Seagal, creator of the front kick, and the time machine.