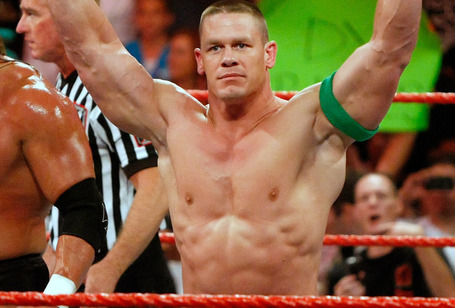 Edited and promoted to the front page by CagesideSeats.com.

On July 22, 2008 the WWE officially made all of its television shows PG rated. It’s been over three years now since the change, and that raises the question: has it helped any? Let's look at it from a TV ratings perspective, along with a quick look at the WWE finances.

First of all, I’ll put out the data that I used so you can use it as a reference guide.

This is a graph of the "Monday Night Wars" TV ratings, from Sept. 1995 until March 2001. I will focus on Raw's ratings for this article. 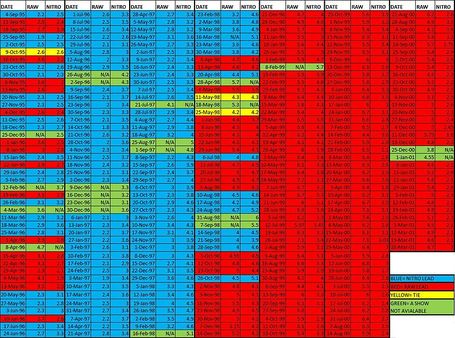 Next is a link to Gerweck (right here), a website that had wrestling TV ratings from 1998 until present day. It's very helpful with over 16 years of ratings. Also, if you’re not really into ratings numbers, the range from lowest to highest per show is around 1.8 to 7.4 in the 16 year span that I have to use.

I think we can agree that WWE (I’ll just refer to the WWF as the WWE throughout for ease ... and laziness) from the early to mid 90s leaned more towards PG. Going by these ratings, Raw hovered around 2.5 during this time period. In July 1996 at the King of the Ring, Austin 3:16 was born, but the ratings did not show much improvement during this time.

In fact, they declined through much of 1996.

This was when the "Attitude Era" began and WWE’s content slowly became more adult oriented thanks to the heavy influence necessitated by both WCW and ECW.

It wasn’t until 1998 when Raw began to build a larger TV audience.

In that year, Raw saw steady 4’s and slowly but surely pushed into the 5’s. 1999 saw an audience rating of 6’s and 7’s that tuned in to watch wrestling week in and week out. This is the time of DX vs. nWo, The Ministry, scantily clad Divas, and Hardcore Champions.

These two years brought wrestling to new heights, away from the corner cartoon look and on to a more reality based product. In short, it was cool to watch pro wrestling again.

Bottom line? Speaking strictly from a ratings standpoint, the change has not worked. TV ratings have steadily decreased over time.

So why hasn't WWE made a change back to PG-13? Maybe looking at this from another standpoint would help. Let's take a brief look at the finances.

WWE’s stock has gone on a roller coaster ride since the PG change, from $16 dollars a share, down to $9, peaking at $18, and currently at $10. Tough to read anything from that, but what I look at is their yearly net revenue. After all of their expenses what are they left with?

Bottom line? The company increased their profits by about 8 million in 3 years. During a down economy, that's pretty good.

The ratings may be stagnant but profits are up. I think it's safe to say this one is a toss up, yes?