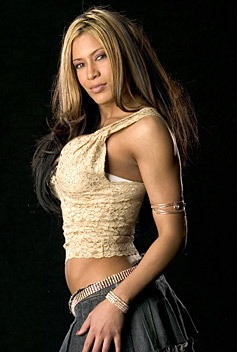 Melina's strange loss on Monday's Raw women's six-woman tag certainly raised some eyebrows among fans and critics alike. Melina, fresh off a heel turn aimed at invigorating her stale career, recently became the latest challenger to Natalya's Divas Title (that's the rather ghastly butterfly belt, for those who don't know) and had been booked strongly, or at least, as strongly as one can be booked in a laughing stock of a division no-one in WWE seems to care about very much. But, alas, it didn't last: Melina was pummelled by Natalya in the match, and then later finished off by Eve Torres (possibly the worst dancer since David Brent, by the way) with a corkscrew neckbraker, effectively stopping her new push dead in its tracks. It was odd booking, credibility-killing and entirely counter-productive. The entire thing reeked of WWE pettinessTM. And, indeed, it was. But just what had Melina done to deserve such shoddy treatment?

The answer is, of course: Twitter. Yes, Melina has recently joined the ranks of Kevin Nash, Jeff Hardy, Matt Hardy, MVP and Taryn Terrell (to name but a few) in engaging in unprofessional and erratic tweeting online. Unlike MVP she wasn't bitching about her push (something that only ensured Porter dug the hole he was in even deeper) or complaining about being unappreciated like Kevin (an anguished Nash complained that TNA never recognized him as the "icon" he was and claimed that footage of him tripping on acid and walking around a mall would get better ratings that TNA iMPACT at this point; he may be right.). No, these tweets were regarding her tempestuous on/off again relationship with John Morrison. She wrote:

"Getting dumped must be the new trend this new years. The feeling sucks. I’d rather be baby face and b in love than heel & dumped.I wish I could b perfect enough. I wish I was him. I truly wanted to be the perfect woman for you."

More after the jump.

I spent a good five minutes trying to figure out just what "I'd rather be a baby face and b in love than heel & dumped" truly means. I'm still at a loss. Of course, Melina has been known for slightly bizarre for a while now. One look at her YouTube channel confirms this. Filled with clips of a spaced-out looking, constantly smiling Melina, occasionally accompanied by, er, a giant bag of skittles, the videos are...interesting to say the least.

As Dave Meltzer noted on the free January 4th edition of Observer Radio, Melina's puzzling burial on Raw was almost certainly rooted in these tweets. Rules are no breaking kayfabe, and, even if that can forgiven, rambling about a broken relationship to fans is a definite no-no. Not only is it inconsistent with the on-screen storylines, it also makes you seem-GASP!- human. And, in WWE eyes, wrestlers aren't supposed to be human; they're supposed to be larger-than-life characters without flaws or problems like everyone else ...or something like that. These are stupid rules but, after the Matt Hardy debacle, still ones wrestlers should know about.

Perhaps recognizing her mistake, soon after she put the tweets up, she claimed to her webmistress her account had been hacked, and a few hours later put up a tweet complaining about hackers and assured everyone her and Morrison were still together. That she could lose and gain control of her account, all within a few hours, raised a few eyebrows. Even CM Punk took to mocking her online, writing on his twitter: "My twitter got hacked. All those awesome and hilarious tweets were clearly somebody else." Doesn't look like the company bought Melina's explanation either judging by her treatment on Raw.

This was a sloppy move by Melina. True, she has her backers in the company (Bret Hart is a big fan, and has often called her one of "the best wrestlers in the world" prompting certain observers to wonder whether "The Hitman" has actually lost his mind) but she also has her fair share of detractors. In 2006, when her star was on the rise, comparisons with Sunny were made, amid accusations that Melina's ego had grown out of control and those at Smackdown had found her so difficult to deal with, they had to shift her and her boyfriend over to Raw. She also went to the dreaded wrestlers' court (a hilarious account of this incident can be found on Paul London and Brian Kendrick's highspots shoot.) There have also been stories of political problems with the other girls: her and Mickie never saw eye-to-eye, she didn't get along with Sharmell (Booker T's wife) or Brooke Adams (current TNA Knockout/Part-time Hooters waitress) either.

Furthermore, Taryn Terrell, shortly after her exit from the 2007 diva search, told World Wrestling Insanity's James Guttman, Melina was one diva she had been warned about while in the company. Reports recently came out that she been resistant to turning heel (because her babyface character was setting the world on fire?) another issue that was reported to have caused her problems with management. Make no doubt about it, her situation is bleak: she's past 30 (which as ridiculous it sounds, is old by WWE management standards), has churned out some horrendous in-ring performances (her and Jillian, in particular, have put out some utter disasters) and NXT season 3 has created a whole new gaggle of fresher and better looking models waiting to be called up to the roster to replace the old batch. Indeed, NXT season 3 happened with women partly because those in power in WWE were beginning to find the current crop of divas troublesome and were eager for replacements. So why she's squandering what may be her last chance is beyond me.