Share All sharing options for: Who won the WWE Royal Rumble last night? 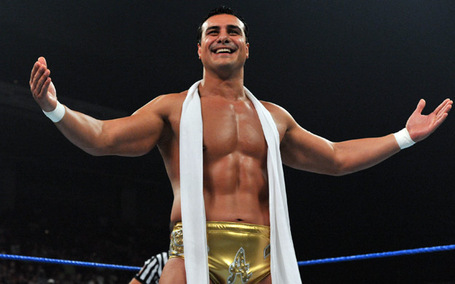 The one and only, Alberto Del Rio.

That was not without a slight scare, however. As the Rumble played out, it looked more and more like we would see the same old same old from the WWE. And sure enough, the final four consisted of John Cena, Randy Orton, Wade Barrett and ADR.

Pro wrestling fans everywhere collectively shook their heads at what they all assumed was coming next. Surely, Cena would eliminate Barrett while Orton simultaneously threw out Del Rio. And once again, we loyal (read: stupid) fans would be treated to yet another staredown followed by mediocre ring work from two of the promotion's top stars, at least in Vince McMahon's eyes.

Of course, that thought process was misleading as most of us had forgotten that Miz was sitting ringside doing commentary. Or at least, I did. When Alex Riley made his way back out to distract Cena and Miz came in and dumped him over the top rope, wrestling fans over the age of 10 celebrated.

Finally, it wasn't going to be Cena hogging the main event spotlight. He had done enough of that throughout the Rumble itself.

So that left us with three and no one really believed Barrett was going to get the win, not with the current storyline playing itself out on Smackdown with The Corre, so he was out. That left Orton and ADR.

It would have made a lot of sense, at least from a business perspective, to give the win to "The Viper." After all, who would you trust more to headline WrestleMania? But the timing is right to give Del Rio a big push and thankfully, they pulled the trigger.

Comedy act with Santino to close it aside, the Rumble wasn't bad. At least, we got a winner we can get behind.

A few other thoughts from the show after the jump.