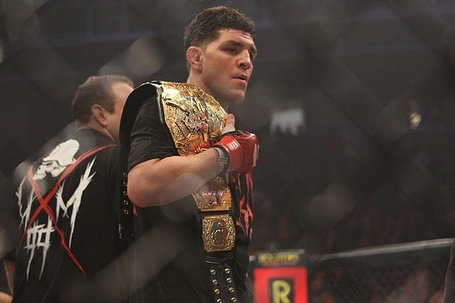 It was a thrilling night overall for fans in San Jose and at home, with Strikeforce putting on another quality event packed with exciting fights and excellent finishes. The preliminary bouts aired live on Sherdog were filled with finishes, both submissions and knock outs, but the main card definitely stole the show.

In the first fight of the night, Roger Gracie showed the world that he's evolving as a mixed martial artist against the toughest test in his young mixed martial arts career. Gracie came out patient, showing savvy stand up by probing with jabs, and landing hard inside leg kicks. Prangley tried to explode with counter punches, but couldn't find the mark, and found himself in Gracie's muay thai clinch, eating multiple knees to the body and head. Shortly after, Gracie took the fight to the mat, and it was a matter of time before the BJJ champion took Prangley's back, secured a body triangle, and locked in a rear naked choke for a submission victory in the first round.

Heisman trophy winner Herschel Walker brought home a first round KO against Scott Carson after a dominating performance leading up to the punch that put Carson on the mat. Carson came out and attacked Walker, throwing caution to the wind, landing a leg kick that shook up Walker, and Walker answered with a hard shot that put Carson on the mat. Walker stayed patient, secured his position on the ground, and proceeded to pound away on Carson, who had no answer for Walker's top control. Finally, Carson managed to find his way to the feet, but was brought crumbling down by a punch, and the fight was stopped. It may have been premature, but I feel that Carson just would have continued to take punishment should the fight have continued.

The co-main event was a middleweight title match between BJJ champion Ronaldo Souza, and heavy hitting Robbie Lawler. It was a breathtaking display from beginning to end, the first round featured solid punching from both men, but the fight was taken to the mat by Souza. Despite being far more skilled in jiu jitsu compared to his opponent, Souza couldn't do much damage to Lawler on the ground, and Lawler eventually found his way to his feet. Lawler rocked Souza with a series of blows after this, and sent Souza to the mat, rocked. Lalwer jumped into Souza's guard, but neither man accomplished much as the round came to an end. The second round saw more grappling than striking, and two armbar attempts from Souza, both of which Lawler escaped from, which was HIGHLY impressive. Going into the third round, I had the fight scored 19-19, but there would be no need for scorecards here. Souza came out, secured a muay thai clinch, and fired off multiple knees, then followed up with a take down. After attempting to escape, Jacare took Lawler's back, and finished the fight just as BJJ rival Roger Gracie did earlier, with a body triangle followed by a rear naked choke. Jacare is one of the most impressive middleweights not in the UFC, and he showed why tonight.

The main event can be described as a beautiful disaster, a brawl to be remembered, that much is certain. Nick Diaz put his welterweight title on the line against Evangelista Santos, husband to Strikeforce Women's 135lbs champion, Christiane Santos, and the fight was a great finish to a night to be remembered. Diaz began taunting Cyborg right out the gate, but Cyborg would have none of the mind games, landing hard inside leg kicks, and he landed those kicks all night long. Cyborg looked in great form, combos, body shots, and those vicious leg kicks were leaving Diaz on the defensive throughout the first round. That is, up until Diaz managed to fire back after finding his range, rocking Cyborg. Diaz couldn't seal the deal though, and the men continued to exchange strikes through the end of the round. In the second round, Diaz had found his range, but Cyborg was working solid counter punches, and the aforementioned leg kicks. After the majority of a round that I feel Cyborg was winning, Cyborg took Diaz to the mat, which would prove to be his undoing. Diaz locked in an armbar, and forced a tap out just before the end of the second round.

Overall, it was a great night for Strikeforce, and they were pushing their upcoming heavyweight grand prix quite a bit. Should Strikeforce continue to keep up this momentum, and put on shows of this quality, we may very well see their stock rise in 2011.

Photo via Dave Mandel, for Sherdog