Share All sharing options for: You're Fired! Multiple Fighters Released Following UFC Fight for the Troops 2 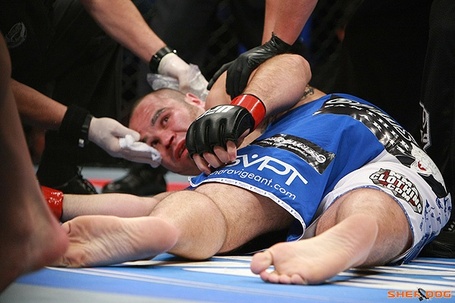 "You're Fired!" is back, we've got two fighters looking for work after losing their bouts at UFC Fight for the Troops 2, another who hasn't fought since September of last year, and one retirement:

Tim Hague has been on two tours of duty inside the UFC, with a record of 1-4 with the promotion, the final loss coming as a first round TKO from Matt Mitrione in the co-main event of UFC Fight for the Troops 2. From here, Hague may surf the regional circuit to pick up a few wins and attempt to get back into the UFC, but the problem with Hague is he's just below what the UFC considers "UFC caliber" and picking up wins in smaller promotions is no problem for him. If I was Hague, I'd get in touch with Strikeforce and see if a deal could be made that would allow him to not only fight in Strikeforce, but pick up wins in smaller shows as well. That is, after he takes some time off, and debates on attempting to cut to 205 pounds, as he told Sherdog after he was cut.

Brazilian welterweight Amilcar Alves lost a unanimous decision to up and coming Charlie Brenneman, and having lost his in his UFC debut against Mike Pierce at UFC 118, the UFC saw fit to let him go. Alves put together an 11-1 record in Brazil before coming to the UFC, and I suspect he'll head home, rest, and get right back to training with the team at Nova Uniao. With such a solid gym, I expect Alves to get some wins in Brazil, and look to get signed back to the UFC before long.

Ed Ratcliff was released as well, after being inactive for an extended period of time. Ratcliff had lost three of his last four bouts in the WEC and had yet to make his UFC debut. Most recently, he lost a split decision to Chris Hordecki, which left him with a 3-3 record in the WEC.

Be glad I didn't do some tacky fired/retired rhyme going into this one. Mike Guymon ended his career shortly after his submission loss to DaMarques Johnson Saturday night, with a record of 12-5-1. Guymon reached the UFC after spending 2003-2009 with King of the Cage, he then went 1-3 in the UFC.

More cuts are expected to come throughout the first half of 2011, and fighters will do well to be wary if they are on a losing streak, as one more could be the straw that breaks the camels back for them. "You're Fired!" will be back after UFC 126 coming up on February 5th.

Photo via Dave Mandel, for Sherdog