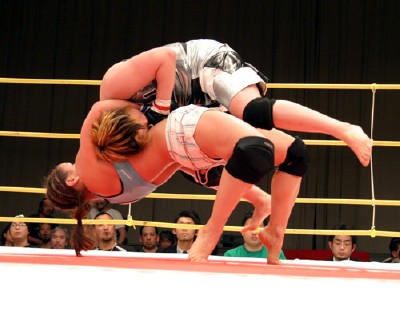 I thought I'd start a short series on Pro Wrestling terminology just to show how it has permeated MMA, and by small coincidence probably force Luke Thomas to start removing terms he might currently use from his extensive vocabulary once he finds out their dreaded origin.

First on the list: The Suplex. Yep, sorry Luke, this has Pro Wrasslin' written all over it. This entry was influenced by KidNate's recent Bloody Elbow Judo Chop.

The original, correct term is Suplay and it comes from Greco-Roman wrestling. Greco-Roman Wrestling, despite its name, was mostly developed in France out of the regional styles such as Breton wrestling, which was a form of jacket wrestling that like Cornish wrestling from England (also jacket) could have influenced some of the throws found in Judo when European sailors would wrestle with the natives of countries Europe traded with. Japan was a big part of the silk trade which was heavily competitive between the English, Dutch and Spanish in particular. Japan is known for its silk kimonos, but the canvas Gi's we associate with Judo and BJJ likely evolved from the European use of canvas in the navy and their own jacket wrestling.

That aside, the term Suplay comes from the French word "souplesse" which is where we get the English word "suppleness" as in flexibility. Suplay as a term in Greco-Roman wrestling likely refers to the flexibility in a back-arch to land a throw and bridge for a pin. As a result most Suplays are from a rear waist-lock (Belly-to-Back)

Now there is also another term for throws in wrestling, less commonly used but it can be found in Catch wrestling, known as a Salto. It was often used for throws from a front waist-lock and with good reason. Salto in Latin means "jump" or "leap", but it is also a term that used to be used in gymnastics for what is now called a somersault. So a Salto in wrestling is a throw that causes the opponent to completely flip over as is the case with a lot of overhead or turning throws from the front (also known as Belly-to-Belly throws).

In the above photo we see a Salto. Why isn't it a Suplay? While Marquez has a back arch she's flipping Emoto with the throw. Of course, if Emoto ends up face-planting instead, then it can be called a Suplay!

It wasn't until Pro Wrestling that the term Suplay evolved into Suplex, possibly by mistake from those unfamiliar with its meaning because less and less actual wrestlers would get into wrestling, even dating back to 1925 when Ed "Strangler" Lewis brought in Wayne Munn, a big time Football star to become world champion in a worked fight with Stanislaus Zybyszko. Zybyszko didn't like the idea, double-crossed Lewis and whooped Munn legitimately before jumping ship with the World Title to a rival promotion run by Joe Stecher (who Zybyszko was secretly working for to begin with).

So, there you have it. The next time you see a Suplex, you're actually seeing a Suplay. Or a Salto. Or just a badass throw.