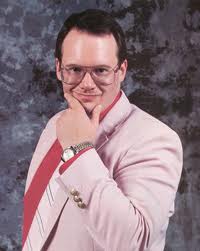 For almost 30 years Jim Cornette has been involved in the pro wrestling business. He's been a manager, a booker, a commentator, an on screen personality and a promoter. He's done it all in the business and he's gained quite a bit of knowledge along the way. He's got a reputation as being a bit of a hot head who gets himself in trouble with his loose tongue but there is no denying how much he has done throughout his career. Brian Fritz from Fanhouse did an interview with Cornette that has a lot of interesting quotes.

In regards to the future of pro wrestling:

"MMA and the UFC have taken all of the pro wrestling fans because it's pro wrestling from 30 years ago, just in an Octagon and the fights happen to be real. But they're marketed exactly the same way. People want new stars, young athletes, a more serious approach. Athletic competition with interesting personalities with a hard sports edge and take the UFC fans back or at least entice a few of them to come back and then you'd have something."

So why wouldn't any of the promoters of today try a formula like that?

"No one wants to try that because it would mean that everybody mostly over 40 in this business would be out of a job and those are the guys sucking up all the money."

This makes a lot of sense in that many of the top decision makers in wrestling today are badly out of touch with what the public wants. WWE has gone the PG route but it's debatable as to whether or not that decision was made due to Linda McMahon's political aspirations. TNA tries to present itself as the more realistic product but they end up with goofy storylines and seem to go way over the top way too often. Cornette spent time with TNA but as soon as Vince Russo came aboard things changed for him. Russo has a ton of critics and Cornette may be his biggest.

"Nobody can succeed with Vince Russo even working in the company, much less creative. And that is the one person Dixie Carter has protected at all turns. Nobody understands it. Nobody can explain it."

I couldn't agree any more with Cornette here. Russo came to fame during the huge boom period that was the Attitude Era from 1997 to 2002. He was credited with a lot of the new ideas the WWE started to incorporate at that time such as the much more realistic storylines and the backstage segments. He believed the fans would respond well if the WWE just pulled the curtain back a bit and acknowledged the work. This worked in some ways but failed in many others.

After Russo's name came to light as being the brains behind the WWE he played this against the company and skipped over to WCW where he absolutely buried everybody in the promotion. As it turned out Vince McMahon acted as a sort of filter for his crazy ideas. Once that filter was gone we got such gems as the Hogan-Jarrett debacle at Bash at the Beach and Diamond Dallas Page jobbing to actor David Arquette for the Heavyweight title. Despite his failures at WCW, TNA brought him on and you can tell he's there by the product they put on TV each week.

Cornette has stated that he would be welcome to a return to TNA as long as Russo and his partner Ed Ferrara weren't with the company because he can't support the creative direction. After leaving TNA he went to work for Ring of Honor, a promotion full of young budding stars.

"The only other thing that interests me in wrestling these days is Ring of Honor wrestling. That's my primary occupation these days and it's got the youngest talent roster in the business but they're so respectful and appreciative of the legends when they get a chance to meet them.

"It's great to see the new generation of the business but at the same time, once a year, visit with the older generation. My generation."

Ring of Honor is largely considered number 3 on the food chain of major wrestling promotions. Whether Jim Cornette can turn them into something bigger remains to be seen but he can certainly help the younger stars who might be able to move on to bigger things with TNA or the WWE.