Share All sharing options for: The latest Jeff Hardy news 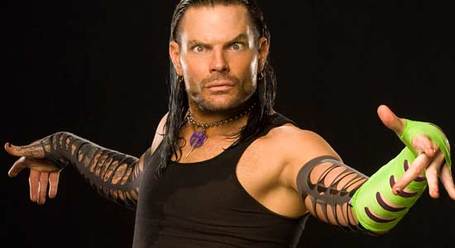 Apparently The Inigma turned down a pretty sweetheart deal on his way out the door.

The Wrestling Observer is reporting that the WWE were trying to get Hardy to sign a new contract up until the very last second. The WWE agreed to every request Hardy made, to the point where they would allow him to only work TV tapings and pay per views, with zero house show appearances. It is expected that they will have to give this deal to Shawn Michaels and the Undertaker next, as they have been asking for similar workloads for years.

After it became evident that Hardy was leaving, the WWE then attempted to sign Jeff to a merchandise deal, allowing them to continue marketing and selling merchandise with his name and likeness on them. This would have also effectively stopped him from working from TNA, as they would not be able to produce Hardy merch. Jeff also said no to this contract.

It is believed that, while Hardy will be making appearances at wrestling shows, he will not actually be performing. He is evidently concentrating 100% on getting his reality show up and running.