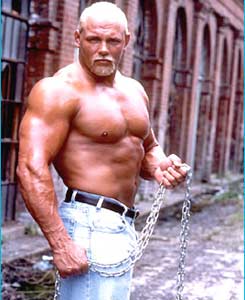 Wrestler and fighter Ron Waterman talked with Sherdog.com from the unique perspective of having spent a good amount of time with both Brock Lesnar and Shane Carwin.  Carwin and Lesnar are slated to meet at UFC 106.  He talked about each of their strengths and wrestling abilities, as well as professional wrestling in general.  Also, this is the first I've heard of Waterman fighting Lashley.

Sherdog.com: Back to you and Lesnar in OVW: was it quiet, or did anyone ever want any trouble?

Waterman: It never happened. We just spent a lot of time together hanging out at the mall and going out to eat. No one had that much courage. There were a group of guys: Dave Batista, John Cena, Randy Orton, Mark Henry -- just a bunch of big freaks.

More juicy bits of the interview after the jump.

Sherdog.com: You and Lesnar spent a good deal of time together in Ohio Valley Wrestling (OVW), which was a developmental league for the WWE, around 2000-2002. Did he ever discuss fighting with you then?

Waterman: I think he wanted to do it back then. We were both locked in to WWE contracts at the time. I had already fought in the UFC, and he said it was something he might want to do if wrestling didn’t work out, down the line.

Brock and I were pro wrestling, but we would train a lot, roll a lot, wrestle a lot, just to stay in shape. Shelton Benjamin, Brian Keck, other college wrestlers were there, too. We’d wrestle all the time. As big as he is, to be as strong and as quick as he is, it’s amazing. He was close to 300 pounds and could do a standing back-flip. He was one of the only guys I’ve trained with that could take me down at will.

Sherdog.com: Did your backgrounds help avoid any hazing rituals in that wrestling culture?

Waterman: I had four UFC fights when I was called into OVW. The first day I was in practice, Mark Henry, all 450 pounds of him, got into ring and called me out. I think he lasted about 35 seconds.

Waterman: I think Brock would have to have the edge on physical strength. He probably walks around a little bit heavier than Shane. But it’s not a huge difference. They’re both extremely strong. I might give athleticism to Brock’s side, but the technique to Shane a little more. He’s come along with his ground and stand-up. He’s got good submissions now.