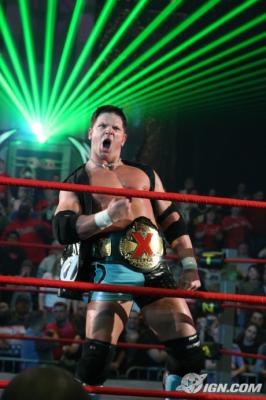 Shades of Super Nova are all over this story

IGN.com interviewed AJ Styles about TNA's future and the new TV deal, when a question was asked about the WWE's Michelle McCool using the "Styles Clash" as her finishing move.

IGN: Listen, I have to ask. WWE Diva Michelle McCool has come under some fire on Twitter for using your finisher, "The Styles Clash," as her finisher. How do you feel about that? What's the etiquette in the industry? Do people ask to use other people's moves, or is that something that just happens when you're a competitor?

Styles: Gail Kim's one of my really good friends, and I asked her about that and we talked about it and she (McCool) does do my move, but I'm flattered that she would think to use that move. It doesn't bother me at all. I guess it might be different if a guy was doing it and calling it something else. At one point Crash Holly was doing the "Crash Landing" which was The Styles Clash, but little did I know that they were just big fans of the move. Crash was a good guy. We got along great. We actually did an independent show and we both were going for the Styles Clash and we got into an argument. It was really funny.

The fact of the matter is this. People know it. That's the Styles Clash. That's my move. I came up with it on my own. It's okay. I understand, you gotta come up with something and there's not a lot of moves in the world. It's hard to be different. But it's cool with me. Now it would be different if it was a guy in my own company. But there is that one dude. What's his name? I'm like, good grief, this guy does everyone else's move and hasn't come up with one. He's a heck of an athlete. Morrison. Yeah, I've seen him do a lot of Low Ki's moves. He does my Spiral Tap. I was like, "Man, this guy watches a lot of tape." But he does them well, so I can't say anything bad about him. He does them well. He's heck of an athlete.

First of all, I'm sure the first time the Styles Clash was ever used in a match was probably in 1952 or some such. Second of all, the next time a wrestler asks another wrestler in an opposing fed for permission to do a move will be the first time.

AJ has always been a suspected asshole by most fans. Every interview he gives drips with smugness, and this IGN piece may be the first time he has talked for more than 15 minutes without dropping, "Now, I don't hate the gays, but..."

Oh, and for any of you that don't remember Super Nova, he was a wrestler in ECW (later in the WWE as Simon Dean) who was NOTORIOUS for saying, "That guy stole this move from me, that guy stole that move from me....see the way he got into the ring? Yep, me." Hell, if I can fantasy book TNA for a second, I would spend the $50 it would take to bring him in and make him Styles' manager/mentor in his inevitable feud with Sting, just for a laugh.