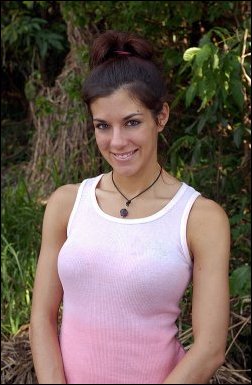 Main Event Mafia valet Jenna Morasca is no longer with TNA Wrestling as her contract was not renewed, according to Dave Meltzer.  The former Survivor star, who parlayed her nude appearance on the CBS reality series into a pictorial in Playboy magazine in 2003, was inexplicably signed to a short-term deal with the wrestling organization  earlier this year in what one can only assume was a feeble attempt at bringing "star power" to TNA programming.  Despite only lasting a few months with the company, Jenna provided fans with a memory they will never forget: a pay-per-view match with Booker T's wife Sharmell which is not only the clear front-runner for worst match of 2009 but may very well be the worst match in TNA history.  That match...after the jump.  (Be forwarned though, while the clip is essentially safe for work, Jenna's highly suggestive (though not really at all sexy) stripper entrance might raise a few eyebrows if your boss is looking over your shoulder.)