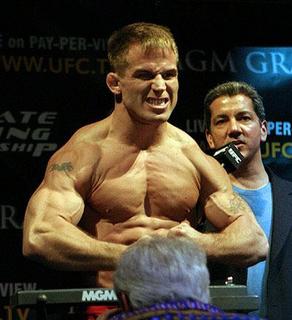 Sean Sherk has already tested positive for steroids.  Because of that in his background, he will always be among the first called for pre-fight tests.  There is always a cloud of doubt surrounding him, there always will be.  Yesterday, that cloud thickened.  According to the Wrestling Observer:

Word of the injury got out on the evening of 9/2, a few hours after he was scheduled to take a random drug test by the California State Athletic Commission. He didn’t get on the flight to California and when he no-showed, UFC informed the commission that Sherk was injured and was off the card

Injuries happen all the time in MMA.  Training for the fights is often more grueling than anything that happens in the cage.  Sherk may very well be injured.  But because of his past, there will be that nagging doubt, that sinking suspicion that he faked an injury to avoid a drug test he wasn't ready for.  He will be replaced in his fight by Josh Neer.