A Nickel a Month Can Save the WEC

Share All sharing options for: A Nickel a Month Can Save the WEC 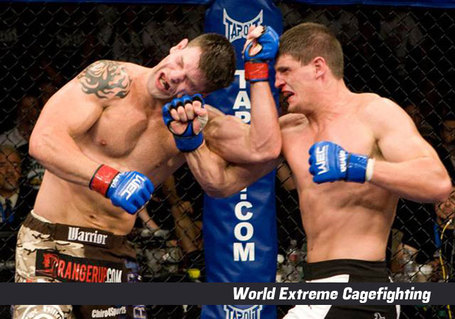 That's it.  One measly nickel a month.  What kind of pansy would help starving kids when they can save the fighters?  Where is Sally Struthers? Heavy.com has more, trying to explain to the mainstream audience what the hell the WEC is.

If you haven't seen it (and judging by their meagre ratings, that is true of pretty much everyone) World Extreme Cage Fighting is just like the UFC.  Only instead of fighters you know like Tito Ortiz or Brock Lesnar, it has tiny and delicate men pounding the crap out of each other. The main claim to fame for the WEC is its bantamweights and featherweights, men smaller than the average Midwestern woman.  These pipsqueak warriors are often dwarfed by the referee telling them to touch gloves and come out fighting.  This is especially funny when the ref is a gargantuan man like "Big" John McCarthy.

In all seriousness, the longer this dispute lasts, the more likely we are to see the promotion fold and be engulfed by the UFC.  This would be a shame, because the number of little guy fighters employed would be immediately cut in half.