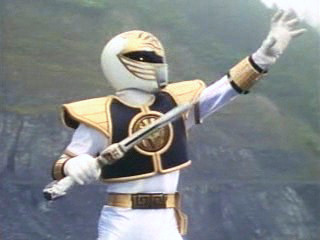 No, I haven't gone crazy yet. Yes, I am posting a photo of a Power Ranger on here, and I have a very good reason; Jason David Frank, of Power Rangers fame, apparently trains to be a Mixed Martial Artist. Apparently, according to MMA Weekly, he has been training in MMA for quite a while now;

The former action star from the hit series "Mighty Morphin Power Rangers" has officially made the move to mixed martial arts, and while training with UFC lightweight Melvin Guillard, he hopes to make his real fighting experience as successful as he did on television.

Frank signed on with Suckerpunch Entertainment recently and hopes to make his professional debut in the very near future.

"I was supposed to fight in 2007, but it fell through. In truth, I’ve wanted to put the work in until I’m ready," Frank said in an interview from the Suckerpunch website. "I know I have a target on my back. Everyone is going to want to beat up the Green Ranger. But I am no Kimbo; I’ve been training for a very long time. I wanted to get in there before, but I got injured. But I’ll be ready when the time comes."

You can also find video of him in Muay Thai bouts on YouTube. Go figure. Don't expect a UFC run anytime soon, as I doubt Dana White is that desperate for names.