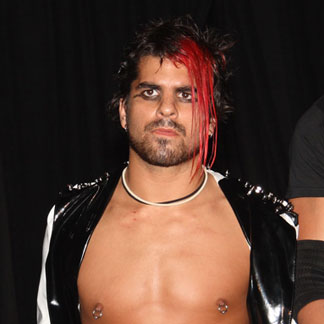 CS: One thing that's been in the news that you definitely have a history with is IWA-MS going out of business. Alot of people could see this one coming. What's your opinion?

JJ: Well, these are financially hard times for everyone. We have been in an economic recession. It hit IWA-MS hard. Another big component is pirating and pro wrestling torrent sites. Why pay $15, $20 for a DVD when you can go online to download it for free. It's impossible for a wrestling company to monitor that stuff. That stuff takes it toll. When your primary income comes from DVD sales, and your fans say, "Screw buying it, I'll download it for free," that puts a huge financial strain on you.

Ian, who isn't a millionaire, who doesn't have a huge money backer...I mean, it's a family operation. If you go to his house, you'll see that. His wife dubs the DVDs, his kids even help out. It went under in part from people stealing his content. It's sad and it's unfortunate. Knowing Ian, this is what he has done for a living for the past 13, 14 years. I don't believe this is really it for the company, but if it is, I wish nothing but the best for Ian.

CS: Does this mean that your relationship with Ian was better than when you first left the company?

JJ: It's been smooth. I scewed up, and I threw the IWA belt in the trash in AAW in 2005. The fact of the matter is, he never raised his voice at me, he never got mad and swore at me, and we made amends that night. I apologized. He had been going through an emotionally bad time, his wife had complications with her pregnancy at that time. Our relationship has always been solid, though.

CS: So, can I get your opinion on Jim Fannin?

JJ: Jim and I don't get along. It's no secret. When I say that Ian and I patched things up that night, certainly Jim and I did not, and haven't since. He avoids me in the locker room and I avoid him. It's a mutual thing. He doesn't like me, and he never will. Some people say forgive and forget, he has done neither.

CS: In your opinion, does Fannin have a future in wrestling now that IWA-MS is out of business?

JJ: I think even if you asked Jim, he would tell you he doesn't have a reason to stay in pro wrestling without IWA-MS. He spent many years working for Ian, not as a performer, just putting money in, and financially it took a toll on him. Some people walk away, and there's no shame in it, and I feel he will walk away.

CS: You brought up something interesting earlier with IWA-MS and torrent sites. After Gabe left ROH, word came out that ROH was hanging on financially by a thread. Many are blaming that on the booking, but could torrent sites be taking a huge part of their business also?

CS: Do you have any relationship with ROH at the moment?

CS: So as of now, there are absolutely no future bookings there?

JJ: No, no. There are no future bookings. Right now, I would say we are on fine enough terms, not great, but fine enough. Not to the point where you will see me working there anytime soon, but I worked for that company for 6 years, from June 2003 to June 2009. That's a long time to put your heart into something, so ROH will always have a place in my heart, and I'll always be concerned with how they're doing. I try to keep up with results, and I watch the TV show. and I try to watch everything I can. I hope for the best with them.

CS: Compare your relationship with Ring of Honor now with how it was in the beginning. With Gabe leaving, was that the catalyst for your departure?

JJ: No. I wouldn't say that necessarily. I felt it was time for me to move on. I had gone as far with my character as possible. If Gabe had stayed, would my character had gone in a different direction? Possibly, but one doesn't necessarily have anything to do with the other.

CS: I was going to ask about your surprise appearance in Dragon Gate USA. It had a lot of people excited about Dragon Gate and talking about upcoming shows. Do you see big things for yourself in DGUSA?

JJ: Well, the fact of the matter is, and I hate to disappoint anyone, but that was a one time appearance. I will not be back there. It was just something that worked itself out, I just happened to be in town. I talked to Gabe, we worked out a surprise appearance. It was great to perform, and I hope that I will be back, but as of now, there are absolutely no plans for my return. The show was great, and the reaction I got from the crowd was overwhelming. It made me very happy and very proud, that they still saw me as relevant in their eyes. It was probably the best reaction I've ever gotten.

(This was before Jim Cornette's appearance over the weekend at Ring of Honor) CS: TNA released Jim Cornette from his position backstage. Cornette has appeared on several ROH shows in the past that you also worked. Did you ever interact with him?

JJ: Minimal, although I did perform in the first ever match that pitted Bobby Heenan versus Jim Cornette, I am proud to say. My interaction with Jim has always been positive, and I would love to see him do something else in wrestling. No one can disrespect what he has done, and Jim is a complete asset wherever he goes.

CS: Speaking of Cornette and his ROH past, one thing he has always brought up in shoot interviews has been ROH's lack of backstage agents. He has said that he believes having a veteran in the locker room to help lay out matches and keep the matches from being redundant with repeated moves. Being backstage, do you think it would have helped ROH to have clearcut agents, or was it fine the way it was/is?

JJ: Jim and I will have to disagree on this. Certainly there was an emphasis on watching the matches going on each night, and talking to other performers, and make sure you're not stepping on anyone's toes. As far as agents go, I don't see the need. If one guy is laying out two matches, those two matches might look very similar to each other. If you watch a WWE match featuring a guy just brought up from developmental, they will work the same match as the last guy brought up. THE...SAME...DAMN...MATCH. That's just the way it is. If you have a guy writing promos for me, and he's writing promos for Zack Gowen, all of a sudden we sound the same, don't we? Also, as far as the old school booker mentality of laying out the card where each match is a little toned down from the one above it...I'm not saying that's wrong, but there's a million things that are right in pro wrestling, and it boils down to either people want to see it, or they don't. Either it works, or it doesn't. ROH has been in business for 8 years now, so clearly something ROH has done was right. If the WWE wants to keep wrestlers off the tope rope at the beginning of the card, fine. But maybe Ring of Honor was the company people came to watch because from the beginning of the card to the end it's balls to the wall. I don't feel like having an agent in the back to say, "Do this,do this, do this, don't do this, this or this," is necessary.

CS: With that being said, it seems like anyone that watches wrestling now has been a lifelong fan, whereas just a few years ago you had new fans, college kids, high school kids, that had never watched wrestling before. In your opinion, what does wrestling have to do to bring in new blood?

JJ: That's the question every promotion is asking themselves now. "What can we do to bring in more than just the bubble fans"? There is no one thing. Everytime wrestling has boomed it's been because of a "perfect storm" situation. In the 40s-50s, TVs were coming out, they needed cheap programming, and Gorgeous George captivated the nation. In the 80s, cable television was getting bigger, and Vince McMahon had a vision. He upped all production values, made it look like a great show, and Hulk Hogan captivated the nation. In the late 90s, all the kids that grew up watching Hulk Hogan were now coming into their teenage years and wanted something more mature. You had WCW on Turner's networks, you had WWE on USA, you had the NWO pop up, and Steve Austin captivated the nation. Austin captivated people that grew up on Hogan but wanted something a little edgier now. What's the perfect storm going to be this time? I wish I knew.

Thanks to Jimmy for his time. If you want to check out more of Jimmy Jacobs, visit his Myspace page for the latest at myspace.com/jimmyjacobs.