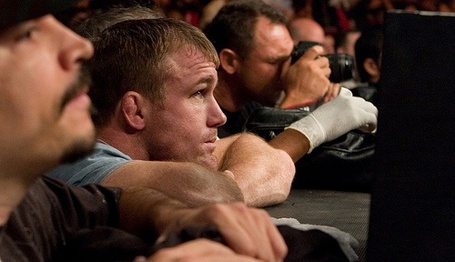 Matt Hughes is confused. I can't say that I disagree with him. A fight with Josh Koscheck at this point in the career of Matt Hughes doesn't make much sense. It doesn't look like Hughes is going to take another run at the title with GSP reigning over the division, nor does it look like he'll drop down to 155lbs. Hughes is looking for money fights, and I'm not sure Koscheck is that money fight.

I find Koscheck calling me out kind of interesting and I actually don’t know why he is doing that. I was used to kids doing this when I was the champ, but as you know I don’t have the belt now and I’m puzzled as to why Koscheck wants to fight me and not the champion in the weight class. I have no interest in fighting Koscheck and, as he was showing everybody, he’s just a kid. As of yet, the UFC has never come to me and asked me to fight him.