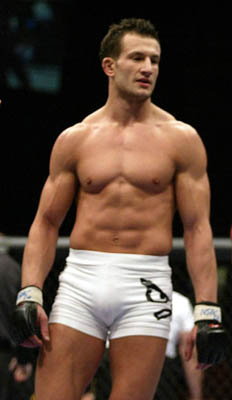 If you haven't heard the tale of Lee Murray, former UFC fighter, guy who beat up Tito Ortiz in a parking lot, Bank Robber and general all-around awesome hooligan, then you are in luck, as Darren Arnofsky will be turning it into a feature film. ESPN's Jake Rossen has the scoop!

Movie night in Lee Murray's Moroccan prison is destined to be something special. According to Variety and IFilm.com, Murray's $86 million Tonbridge heist will be developed into a film by director Darren Aronofsky (creator of the pretty good "The Wrestler," the depressing "Requiem for a Dream" and the toad-licking "Fountainhead"). Writer Kerry Williamson will provide the script, based on Jon L. Wertheim's feature in a 2008 issue of Sports Illustrated. Release date TBD.

Murray makes for a better mythological figure than he did a fighter, a fact filmmakers would be wise to consider when dealing with the heist itself. If it's yet another robbery/lam movie, my enthusiasm atrophies. If we get to see Channing Tatum with a dye job play Tito Ortiz -- an alleged victim of Murray's in a street brawl -- then I'll get on Fandango right now.