Share All sharing options for: Can Rampage Stay Gone? 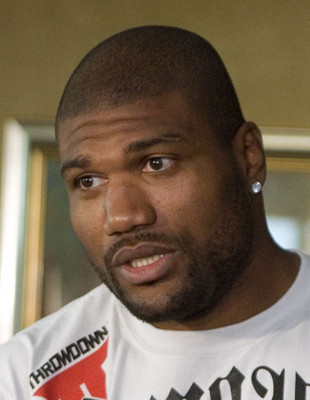 With Rampage Jackson announcing his departure from MMA and UFC, it is a good idea to point out those that came before him and have had a war of words with Dana and the UFC have more or less run themselves in circles. Leaving is easy, it is staying gone that is difficult. Total MMA points out that Rampage is facing a rough road, with other stars having problems staying gone.

Reality, though, might be a bit more harsh than this. If you look at UFC’s history with fighters who want out, you’ll see that Dana White will get what he wants in the end, by hook or by crook. A good example of this is as fresh as this weekend, where veteran Frank Trigg was demolished by Josh Koscheck and UFC President Dana White made it clear that Trigg was "done." Trigg was frustrated, said he was done fighting and would most likely look for broadcasting opportunities in other companies. Frank Trigg will now be offered another fight.
Tito Ortiz is most notably one of White’s biggest rivals over the past few years, to the point where a SpikeTV slot was booked for a boxing match between Dana White and Tito Ortiz. Tito thought the whole thing was a big joke and didn’t show up, so Dana instead had a television special slamming Ortiz and glorifying himself and his training for the phantom fight instead. As soon as Ortiz could be gone, he was gone, had some bidding wars with EliteXC, Affliction, Strikeforce, then Dana got him back into the fold.
Randy Couture was retired, a few times. The first time, he pitched a Heavyweight title fight against Sylvia to Dana and Dana was glad to bring him back. The second time, he wanted out, he wanted to have his dream fight with Fedor and retire. Lawsuits, bad blood, bad PR and a year later, Randy was losing the UFC Heavyweight title to the new Heavyweight Juggernaut; Brock Lesnar. Not even Randy’s budding film career, clothing line, branded gyms or independence could keep him away from the UFC.