Share All sharing options for: Rampage Calling it Quits?? 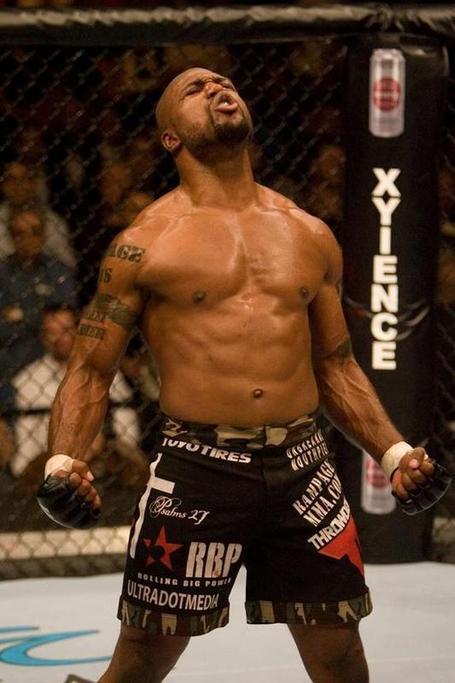 The UFC has done a lot for me but I think I have done more for them. The UFC bought WFA to get my contract & they saved my life, so I felt loyal to them. They pushed me into a fight with Chuck Liddel even when I clearly stated I wasn't ready to fight for the belt because the American fans didn't know me but I took the fight and didn't complain & after I won the American fans booed me for the first time which changed the way I saw them & it hurt me deeply.

Then before I can even get out of the cage they announced that I was fighting Dan Henderson without even asking me. After I beat Dan Henderson, I made history in becoming the first undisputed champion in MMA but was never even given the pride belt in the cage & I was never promoted as the undisputed champ. Later Anderson Silva was.

Then they had me coach TUF season 7 and fight Forrest and the fight was very controversial & normally when a fight is that close & controversial there is normally an instant replay. I can name a couple of instances. Instead they offered me the Vanderlei Silva fight which I gladly accepted even though I know it was a very risky fight for me to take because of all the drama that was happening to me at the time. I fought that fight with a jaw injury and then a couple weeks later Dana called me and asked me to fight Rashad. For the first time I said no, I didn't want to fight because it was such short notice & I wouldn't have had a long break between camp. Dana talked me into fighting Rashad anyway but Rashad refused the fight and so I had to fight Jardine as a favor to the UFC instead of getting my belt back (which wasn't even worth it to me financially).

Then I reinjured my jaw in the fight with Vanderlei & Jardine. Frank Mir gets hurt so they wanted to switch my fight from UFC 100 to the fight Frank couldn't make it to but I couldn't fight cause I needed jaw surgury. So they give Machida the fight against Rashad & they told me they want me to coach TUF season 10 against Rashad. That's why I wanted Rashad to win so bad but when Rashad got knocked out I told them I wanted to fight Machida for the belt but Dana told me if I coach TUF against Rashad that I could fight Machida afterwards cause this was a different type of ultimate fighter show they were doing. After I signed the contract Dana then changes his mind & says I have to fight Rashad & even told me what to say in the press & so my fans think I was scared to fight Machida. After all that I still never complained & I did it all.

Then this movie role came about that I have been trying to get for over a year & as soon as I found out I was close to getting it, I called Dana right away & asked to push the Memphis fight back just a month or so. I told him what this movie role meant to me. I told him that I used to bond with my father watching the tv show as a kid when my parents where still married & it represents the memories I had with my father when we lived together. My dad became an alcohalic & addicted to drugs & we grew apart. But after my dad got his life back together, I was so proud of my dad & I told him I would always take care of him in the future & make him proud of me. My dad & I are still very big fans of the show & I am basically doing this for the childhood memories I had spending time in front of the tv with my dad. Dana went on the internet & mocked me because of that & I still did nothing. Dana & I finally talked & we made up & then after that he went back on the internet & said some bullshit & he was talking bad about the movie when information is not even supposed to be released & talking about payments which is not even true could really hurt my future acting career, which could very well last longer than my fighting career. I'm not like Randy Couture. My body has been getting so many different injuries that I wont be able to fight until my forties & neither do I want to fight that long. So I feel like my second career could be in jeopardy.. so I'm done fighting. I've been getting negative reviews from the dumb ass fans that don't pay my bills or put my kids though college. So I'm hanging it up. I'm gonna miss all my loyal fans but hopefully they'll follow me to my new career & I will gain more loyal fans along the way. & all you hater fans out there can kiss my big black hairy ass! & anybody that don't like what I just said can come try to kick my ass!

I still feel the UFC is a great organization and I felt like I was very loyal to them but they didn't respect my loyalty but I wish the UFC the best. I did a lot of things for them. I wish no bad blood between us but I have kids & a family back in Memphis to provide for & thats all that matters to me!


I'm not so sure he has the balls and "eff you" money to back this up. If his movie career takes off, then maybe. But seriously, basing your career path on playing B.A. freaking Baracas? I suppose he can become the black version of "Tiger" Chung Lee and play "scary black dude" in every action movie ever, but is he going to make UFC $$$ doing that?