Herschel Walker Signs to Strikeforce -- I Wish I Made This Up!

Share All sharing options for: Herschel Walker Signs to Strikeforce -- I Wish I Made This Up! 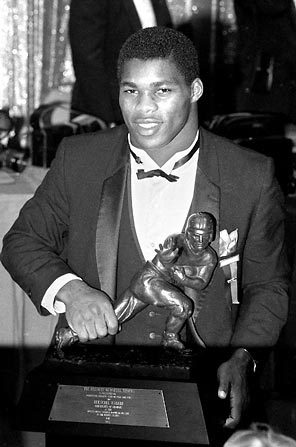 MMA has become the new fad sport for big name athletes to dip their toes into, apparently. With this season of the Ultimate Fighter featuring former NFL players, Jose Canceco entered into DREAM's SUPER HULK freakshow tournament, Shaq trains MMA and has asked Dana White to give him a fight, this might as well be the end of days. Former NFL player Herschel Walker has signed to Strikeforce. Full press release after the jump from Strikeforce.

Seriously, this is ridiculous.

The 1982 Heisman Trophy winner and two-time Pro Bowl competitor will begin a 12 week training camp next month at San Jose, California’s American Kickboxing Academy (AKA), which plays home to a host of the world’s greatest fighters, including STRIKEFORCE Lightweight Champion Josh "The Punk" Thomson.  The 6 foot 1 inch, 220 pound former running back, who already holds a fifth degree black belt in Tae Kwon Do and boasts additional training in the combat disciplines of Muay Thai and Kenpo, will be trained by AKA co-owner and head trainer Bob Cook.

NEW YORK (September 21, 2009)–-Former NFL and NCAA football superstar Herschel Walker will enter a new chapter in his career as a professional athlete when he makes his debut as a heavyweight in the world’s fastest growing sport – mixed martial arts (MMA) - as part of a multi-fight contract he has signed with world championship promotion STRIKEFORCE.

The 1982 Heisman Trophy winner and two-time Pro Bowl competitor will begin a 12 week training camp next month at San Jose, California’s American Kickboxing Academy (AKA), which plays home to a host of the world’s greatest fighters, including STRIKEFORCE Lightweight Champion Josh "The Punk" Thomson.  The 6 foot 1 inch, 220 pound former running back, who already holds a fifth degree black belt in Tae Kwon Do and boasts additional training in the combat disciplines of Muay Thai and Kenpo, will be trained by AKA co-owner and head trainer Bob Cook.

"I’ve been training for several years.  I would play college football games on Saturday and then compete in martial arts tournaments on Sunday after church I’m now looking forward to opening up another chapter in my life and to competing in MMA," said Walker, who recently  was a contestant on the second hit season of Donald Trump’s Celebrity Apprentice reality series on NBC.

"I flew to LA last month to watch Herschel train and was surprised to see his advanced wrestling and striking abilities," said STRIKEFORCE Founder and CEO Scott Coker, a martial arts promoter of over 25 years.  "He’s got work ahead of him, but he’s committed to training at one of the most notable gyms in the sport of MMA so it will be very interesting to watch him progress."

Walker, a 1999 College Hall of Fame inductee who was also selected to Sports Illustrated’s NCAA All-Century Team that year, has never been one to shy away from the road less traveled.

Following his junior year at the University of Georgia where he had set the NCAA freshman rushing record en route to an undefeated season and Sugar Bowl championship victory over Notre Dame, Walker, a born-again Christian, astonished the sports world by withdrawing from school to play professional ball in the newly formed United States Football League (USFL) rather than wait to enter the NFL draft after the graduation of his collegiate class, a rule maintained by the world’s largest professional football league at the time.

Walker was eventually drafted in 1985 by The Dallas Cowboys and established himself as a premiere running back in the league.  In 1986, he was the driving force behind a historic trade

that sent in to The Minnesota Vikings in exchange for five players and six draft picks.

Off the gridiron, Walker has achieved a handful of feats, including a seventh place finish in the 1992 Winter Olympics two-man bobsled competition.  He also nearly made the Olympic sprint relay team.

Now 47 years of age, Walker, a native of Wrightsville, Georgia, will look to conquer a whole new world.  It is a challenge he is extremely optimistic about.

"I will go in there and test myself against any 20 year old," said Walker.  "I know there will be naysayers and I’m fine with that.  I want to prove to people who sit on a couch and don’t do anything but criticize other people that, if you’re a true athlete or martial artist, you’re not old until you can’t get up and walk around anymore.  MMA fighters are said to be some of the best athletes in the world, my plan at the age of 47 is to show the world I am still one of the best athletes as well"

STRIKEFORCE in March 2009 signed a multi-year agreement to stage live MMA events on the premium cable television network.  Last week, STRIKEFORCE announced that it would make its live, primetime debut on CBS with its "Fedor vs. Rogers" mega-fight that it will co-promote with M-1 Global on Saturday, November 7.

About STRIKEFORCE
STRIKEFORCE (www.strikeforce.com) is a world-class mixed martial arts cage fight promotion which, on Friday, March 10, 2006, made history with its "Shamrock vs. Gracie" event, the first sanctioned mixed martial arts fight card in California state history.  The star-studded extravaganza, which pitted legendary champion Frank Shamrock against Brazilian Jiu-Jitsu black belt Cesar Gracie at San Jose’s HP Pavilion, played host to a sold-out, record crowd of 18,265.  Since 1995, STRIKEFORCE has been the exclusive provider of martial arts programming for ESPN and, after 12 years of success as a leading, world championship kickboxing promotion, the company unveiled its mixed martial arts series with "Shamrock vs. Gracie."  In May 2008, West Coast Productions, the parent company of STRIKEFORCE, partnered with Silicon Valley Sports & Entertainment (SVS&E), an entity created in 2000 to oversee all business operation aspects of the San Jose Sharks and HP Pavilion at San Jose.