Share All sharing options for: TNA NO SURRENDER LIVE COVERAGE 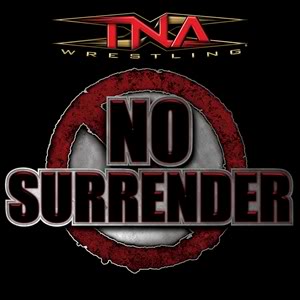 The path to glory starts here, excited! Calling my shot RIGHT NOW: AJ wins the four way and becomes World Heavyweight Champion. Sting gets his final opportunity at Bound for Glory, loses to AJ, passes the torch, and we leave the memories alone.

Sometimes, the only way to win is to surrender: not in this world.

Mike Tenay announced that due to "business reasons", Angelina Love and TNA had to part ways.  He wished her the best in her future endeavors.  Uh oh.

Earl Hebner came out and bounced Slick Johnson from the match, he'll be refereeing.  He also has a HITLER 'STACHE!

A decent opener. went 7-8 minutes.  Velvet Skye is still as terrible as she is adorable, Madison Rayne is a bit better.  Finish came when Sarita hit Velvet with a springboard dropkick and Wilde dropped her on her head with a bridged German suplex. (**)

Eric Young is out in a suit, he'll never lay a hand on one of his brothers.

Destroyed him from the opening bell with two big lariats, finished him quickly with the Border Toss. (*)

A very good fifteen minute match, best of the night thus far.  Joe is not what he used to be but he is a WILY VETERAN.  Joe dominated with nerve holds and submissions but Daniels always had a comeback with big dives.  His luck finally expired when Joe caught him in the Kokina Clutch for the win. (***3/4)

Someone defaced the Tweak 'N Tweet picture in his office, Foley is quite distraught.

The Pope pinned Suicide in a falls count anywhere match

Bizarre opening to the match, very much a 1999 WWE hardcore match.  Started in the back, lots of climbing and falling.  Pope had has entire bare ass exposed while trying to escape over a fence.  They brawled out to the stage area, lots of painful looking falls onto the metal stage.  Suicide pulled a table out from the entrance tunnel and climbed the wall of the set.  Pope rolled off, Suicide went through the table allowing Pope to pick up the win. (**)

Just a fun match, good ol' pro wrasslin'!  The best ODB has ever looked, won the belt with the TKO drop in five minutes.  Post match, ODB cut a tremendous promo with Lauren.  She's bringing honor and hard work to the Knockouts Division and gave a shout out to all of her fans in prison.  Five star segment.  (***)

Internet try too hards have been predicting horrors for this match for weeks despite the fact they've already had a fine match on Impact.  More good action here.  Dr. Stevie came out to distract the ref while Daffney ran around from the back with a taser, quickly eating a Black Hole Slam.  Foley left the announcing booth to hand Abyss a barbed wire baseball bat but he did so as slowly as possible, handing it wire side first.  Nash tased him in the balls from behind and got the pin fall.  Dr. Stevie tried to escape with his satchel full of cash but was powerbombed for his transgression.  Nash left with the belt and the money.  A ** match but throwing an extra on because, seriously, Kevin Nash is old as fuck. (***)

This match RULED.  For those who don't know, Lethal Lockdown is basically the old WCW Wargames.  Cage surrounding the ring, match starts with two men, every two minutes another man enters the fray.  After everyone enters, LETHAL LOCKDOWN begins and roof with weapons tied to it lowers from the ceiling.  James Storm and Doug Williams began the match, the heels always had the man advantage of course.  When Brother Ray came out to even it up five on five, BIG ROB took him out with a chair show, FLEXED, and bullied the ringside technician into lowering the roof without him.  Despite this temporary setback, the good guys prevailed after Beer Money caught Doug Williams driving while investing for the 1-2-3.  (****)

Two of the most boring men on the Earth do battle.  In a company that already has a better, more charismatic, more Mexican version of himself, what purpose does Bobby Lashley serve?  Rhino beat him up forever, Gored the ref.  Somehow Lashley won, assuming it sucked (*)

Hernandez' music hit pre-match, announced he was cashing in his Feast or Fired briefcase for a title shot.  He destroyed Kurt Angle, hitting a loooooooooooooooooooooong vertical suplex and continued the attack outside while everyone else stood around and watched.  He dragged Angle to the stage and herked him up for a Border Toss when Eric Young ran out and whacked him with a chair and delivered a piledriver on the stage, knocking him out of the match.  After that, it was every multi-man main event in history, worse than usual actually.  The crowd was dead for most of it. Sting laid Angle with the Scorpion Death Drop and shot AJ a look.  Instead of making the pin, he dove off the side of the ring at Matt Morgan.  AJ hit a big springboard splash onto Angle as the crowd exploded.  AJ Styles is your new TNA World Heavyweight Champion.  The ring filled with fans as AJ held the belt in the air and cried.  The show went off the air with a joyous scene as the Impact Zone cheered a TNA original. (**)