You had to be from the South to appreciate "Boogie Woogie". 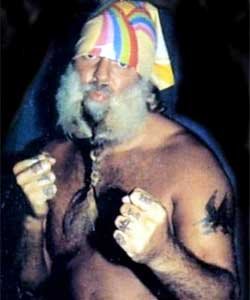 Jimmy Valiant threw some of the worst punches in wrestling history. He was average height, a bit chunky, lumbered around the ring, and was involved in a feud against Paul Jones' Army for 47 years. Seriously, right now Valiant is facing the Warlord (managed by Paul Jones) in a high school gym somewhere in Virginia in front of 40 people. His finishing move looked kinda like the People's Elbow if someone severed one of the Rock's Achilles tendons a second before running the ropes.

But this mfer could pack the arena of a Mid-Atlantic show consistently like no one else. Seriously, at certain points he would be the 2nd biggest draw on a card, after Ric Flair, and if you had done a honest poll of the crowd, probably ahead of Dusty Rhodes. Valiant is what is missing in today's wrestling scene; a guy that looks like he just clocked out at the plant, took a few sips out of a fifth that a buddy was passing around in the parking lot, pulled on some tights, and was ready to have fun. Dusty was the common man? Hell, did all of Dusty's friends turn on him when Jones offered a "raise"? The Valiant-Pez Whatley angle personified what many people were feeling at the time, watching friends and coworkers turn their backs on friendship to get a small taste of "success" and in the process turn into a Steppin Fetchit.

So, here's your #2 Guilty Pleasure of the Month, "Handsome" Jimmy "Boogie Woogie Man" Valiant. Remember, it's not to late to recommend something wrestling related for the list, just leave it in the comment section below.