The latest backstage rumors from TNA on Cornette and James' firings

Share All sharing options for: The latest backstage rumors from TNA on Cornette and James' firings

So, who's taking Jim Cornette and Road Dogg's spots?

It's being rumored that Dixie wants to bring in D'Lo Brown and Pat Kenney (the former Simon Diamond) as backstage agents. Neither is particularly close to Jeff Jarrett, with Kenney stating many times that he believes it was Jarrett that decided not to renew his contract when it ran out last year. Both have worked under Russo in the past.

The biggest news coming from backstage is the reason being given for Cornette's release. It is being said that while it is true that Vince Russo had butted heads in the past over certain storylines, no one had seen anything like the arguments going down between the two over Eric Young's current push. Many have whispered that the smart thing to do was for Cornette to wait until it became evident the program was a flop, and then make his move. As it looks now, Cornette is being portrayed backstage as someone who was against elevating one of the few young wrestlers being given any time on TV, and someone who may have acted like he wanted to be fired all along. 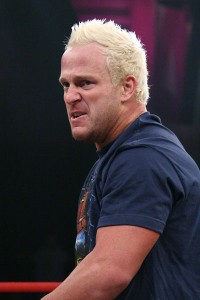