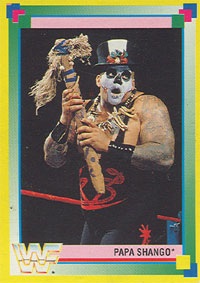 In January of 1992, Papa Shango entered a WWE ring, carrying a human skull that billowed smoke, blinding opponents with magic dust, casting voodoo spells on others that caused vomiting, and controlling the arena lights. This was back in the family friendly WWF Classic days, when every wrestler had to have a cartoon gimmick, and I can only guess Vince had just watched LIVE AND LET DIE. If Vince ever cooked a meal he would have probably packaged Tony Atlas as Uncle Ben.

That's all the guilty stuff, so where's the pleasure? HE WAS A VOODOO PRIEST. No matter how fake everything looked, and the fact you knew all the matches were scripted, at the age of 8 you still go, "Yeah, Jake the Snake is cool as hell, but can he make a guy vomit molasses? No? Well, Papa wins."

If one angle proved how great the character could be, it was his feud with the Ultimate Warrior. Two clips are all you need to watch...