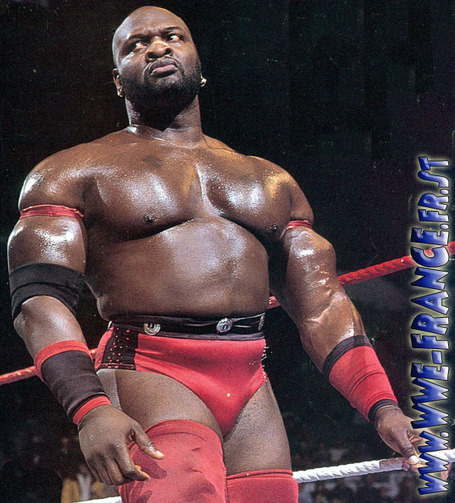 He may as well have been called Black Batista.

Ahmed Johnson debuted with one of the best pushes ever given to a WWE rookie. Being featured in mid-card feuds right from the beginning, he quickly worked his way up to the Intercontinental Title, with a run at the World Title within grasp. That's when reality hit.

Ahmed was one of the clumsiest, most uncoordinated wrestlers the WWE had ever featured that high up the card. From routinely sending his opponents to the trainers room with various bruises, to being constantly injured himself, Ahmed worked his way out of any major role he would ever have in the E. After turning heel and joining the NOD, his longtime rivals, he became injured again and Vince finally pulled the plug. Being totally void of any charisma other than a permanently pissed off face, it would be 2 years before he resurfaced in WCW, this time with a gut that hung over his trunks and feuding with Booker T over sole ownership of the letter "T".

With that being said, there was always a certain thrill to be had while watching an Ahmed match, especially during his NOD feud. Every Ahmed-Nation match involved 12 different Nation members interfering, which meant watching 12 different people run into the ring knowing they might be stretchered out for taking the Pearl River Plunge wrong. Probably the best match of Ahmed's career (he's now retired) was when he teamed with the Legion of Doom (Hawk & Animal) to take on the Naton of Domination (Ron "Farooq" Simmons, Crush, and Savio Vega) in a street fight at Wrestlemania 13 that went all over the arena. It features a botched piledriver through an announce table, a young D'Lo Brown hanging Ahmed with a noose, and Jamie Dundee getting the biggest check of his career for 10 minutes of work.