Share All sharing options for: Swastika; The Worst of Bad MMA Tats 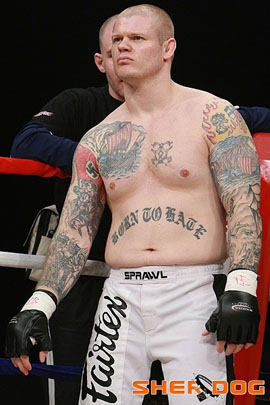 When it comes to MMA, there are a lot of bad tattoos. No, I don't mean bad ass, I mean bad. Also without a doubt there are jokes about how racist fans and fighters can be. When Rashad Evans appeared on the screen at UFC 102, make note how the Oregon crowd booed Rashad without much rhyme or reason. Sometimes it is hard to justify being a fan of MMA, a fighter sporting a swastika tattoo is one of those times. Toni Valtonen, a M-1 fighter who fought at the recent M-1 show had this to say about his tattoo;

"I had a crazy and rebellious youth, I made some faults in my past and I am not proud of these marks. I regret that I ever had these tattoos made. Nowadays I am a dedicated family man and professional athlete, and I am not involved in any politics whatsoever."

While it is nice to know he denounces his "zany" youth where a swastika was somehow a cool thing to sport, it is still in a prominent spot on his body. Regardless of his "political" beliefs, it is a symbol associated with hatred, death and genocide. For a company like Strikeforce that has pushed its way into the public eye, having a link with M-1 means they end up associated with the likes of Toni Valtonen. If Toni Valtonen really disagreed with it, this symbol would most likely no longer be on his body. I couldn't imagine having a symbol like that on my body if I didn't support it.