Share All sharing options for: Evan Bourne: What happened? 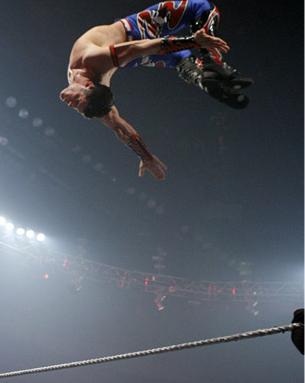 Evan Bourne debuted in the WWE in June of 2008, losing by countout to Shelton Benjamin on ECW. The fact that the writers kept Bourne from being actually pinned by Benjamin, a legit main-eventer in ECW, showed that they saw a lot of potential in this young newcomer. Lately, he's been on the losing end of 3 minute matches on RAW. What happened?

It's no secret that Bourne has found himself in Vince's doghouse. There have been persistent rumors that, while he has never flunked a drug test for steroids during his WWE tenure, it is widely accepted throughout the locker room that Bourne is a fan of marijuana. While marijuana use is not officially a punishable offense under the current drug test criteria, everyone knows Vince hates his wrestlers partaking. Having released two other popular young highflyers with similar hobbies, it was thought that Bourne would get the hint. However, he has actually become louder backstage about it, with many feeling he is rubbing it in Vince's face.

Bourne recently began what is assumed to be a long program with Chavo Guerrero. This is being viewed as a last ditch effort to study under the wing of a longtime veteran while getting over. However, I'm sure someone has told Chavo to try to get close to Evan and let him know no matter how over he gets with the fans, Vince isn't afraid to cancel any push at any time. Just ask Sabu and Rob Van Dam.