Responding to a Moderate Version of the "Bloodsport" Article

Share All sharing options for: Responding to a Moderate Version of the "Bloodsport" Article 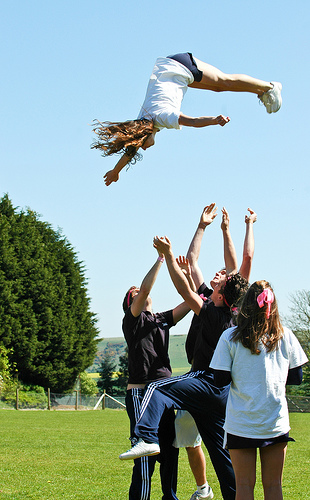 OregonLive.com has a story up by John Canzano about his experience at UFC 102.  He enjoyed the event but felt that it was... you guessed it: too violent and dangerous.  He spends the majority of the article painting a picture of a sport where the competitors get little more than the chance at physical injury from it.  He spends no time discussing the show of skill featured in all of the fights.  While I was stunned at the reversals pulled off by Nogueira, as well as Couture's ability to nullify the former's guard game, John Canzano was apparently focusing on something else. He admits that the sport appears more violent than it looks, and other sports are violent as well, but then he says:

I'd say that the state athletic commission needs to stop worrying about entertainment dollars and start putting the safety of the fighter first. And that the UFC referees need to be quicker to stop fights. And that the gloves of the fighters should have more padding.

First, I guess I should thank John Canzano for not using overly ridiculous descriptions of the fighters and fights.  Unfortunately, if he is really concerned about athletes and feels that it is his duty to improve their lives by writing about it, he is failing at his job.  In the name of safety for all athletes, I encourage Canzano to write a piece about the dangers of cheerleading, which a recent study found to be the most dangerous sport in the world.

How about basketball, baseball, or football?  Hell, don't just write about them (I know, he already does), but target the main organizations for each and encourage them to use more padding, add more rules, and essentially change the sports.  If you're concerned about injuries, these sports should be looked at before MMA, according to the facts that are out there.

According to a 2006 study, trampolines were pretty dangerous as well, and when was the last time someone wrote an anti-trampoline piece?  It probably wouldn't sell.  Considering the popularity of all the sports and activities on that 2006 list (as well as the lack of popularity and thus lack of information on MMA injuries) it seems that if you are trying to save lives and prevent injuries, these sports would be your best bet.

But football is as American as a bald eagle flying in front of a flag (wait a second...), and chances are football fans and the NFL wouldn't care what anybody, even if it was the best doctor in the world, had to say about their sport.  Football players know what they're signing up for.  They might be signing up for an early death, a life plagued with injuries, as well as a big payday.  The difference between football and MMA is, well, for one, someone dying while playing football no longer causes much of a stir.  It happens, and compared to the one death in a MMA, it happens at an exponentially higher rate.  According to an article from the Cincinnati Enquirer:

To date, there has been one death as a result of a sanctioned MMA fight. Still, MMA will always be a more logical target for attack due to the nature of the sport.  Football has fancy playbooks that detract from the violence, while MMA is about a "simple" fight. The fact that you can walk into a bar the night of a UFC PPV and hear at least one person claim they could beat a UFC fighter speaks volumes about the public's misunderstanding of the skill associated with the sport.  The same person wouldn't likely say the same thing about a boxing match, because the sport is more established and the majority of the public understands the skill involved.  Coincedentally, the majority of the public isn't shouting for boxing to be banned, even though several fighters die every year as a direct result of it.

Another frightening aspect of Canzano's article is his failure to distinguish the cause of injuries and possible deaths.  He says:

Because it turns out most of those in the crowd were rooting for big knockouts and devastating kicks. And as hard as I tried to pull for one fighter or another to win, I always found myself secretly pulling for the fight to be settled by a decision and for everyone to walk away with his marbles intact.

As someone with even a small amount of knowledge about MMA or combat sports in general would know, a drawn out war that goes to a decision is likely to include a much higher number of punches landed to the head.  A fight that ends with a fighter choked unconscious could end with none, although, to the average observer, it appears much more brutal since they don't know what they're looking at.  If you think that being unconscious is closely related to dying or being seriously injured, I discourage you from going to any Brazilian jiu-jitsu school, or even hanging around people who drink to intoxication.  As an MMAWeekly report states:

Most deaths in boxing are caused by acute subdural hematoma, which is basically bleeding on the brain caused by sudden head trauma. Any activity that involves blows to the head, MMA included, presents this risk.

In short, the longer an MMA fight stays on the feet, the more danger there is for a boxing-style death.

I don't expect the Canzano's of the world (and he was much more respectful of the sport than many who have written on this topic before him) to go away anytime soon, but it doesn't make their shockingly unshocking articles any less tiring.  We live in a society that often decides what is right and wrong based on how long something has existed or how much money can be made off of it, rather than what is factually and logically correct.  Until MMA proves to be a reliable source of income for mainstream journalists and politicians, I expect these types of articles to be churned out regularly.  Like nearly all sports, MMA is dangerous and comes with its own unique set of risks.  As an informed viewer, or just someone who takes a small amount of time to do some searching knows, it is far from the most dangerous sport.  If journalists are going to take the danger route while writing a piece about MMA, I suggest they start prefacing every article about an NFL, NHL, or MLB game with similar theatrics.