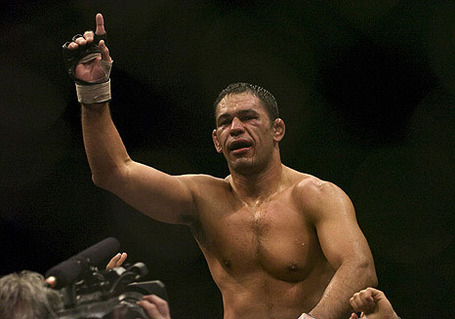 All four of the main event fighters at UFC 102 were coming off of losses.  Randy Couture and Keith Jardine were considered the favorites in their respective fights, and both were upset when it was all said and done.

In the main event, Antonio Rodrigo Nogueira out-struck Couture on the feet and out-worked him on the ground.  Nogueira threatened to end the fight with a submission on multiple occasions, but Couture fought through the attempts and survived.  While Couture landed solid shots on the feet, it was Nogueira who landed the heavier punches and sent Couture wobbling more than once.  At one point, Nogueira knocked Couture to the ground and nearly finished him with hammer punches, a la Brock Lesnar.  The win represents the "return" of "MInotauro," even though he hadn't really gone anywhere.  A loss to Frank Mir created doubt in the minds of critics and fans that Nogueira had endured one too many battles, but the fight with Couture proved the critics wrong, as Nogueira took solid punches but, in typical Nogueira fashion, survived and kept plugging away at his game.  In the end, the judges awarded Nogueira a dominant unanimous decision.

Details and implications for the Silva/Jardine bout, as well as the results for all of the fights at UFC 102 after the jump.

Thiago Silva was coming off of a knockout loss to Lyota Machida and passed the favor on to Keith Jardine.  Jardine scored heavy leg kicks in the first round of the fight, but during a flurry late in the round, Silva landed a heavy shot which sent Jardine to the canvas.  Silva pounced and flattened Jardine out with a series of punches.  Jardine has faced top competition throughout his UFC career, but the loss once again highlights his inconsistency and puts him to the back of the line for a title shot in the ultra-competitive light heavyweight division.  Equally puzzling is what the win does for Silva, as he is nearly fresh off of a loss to the current champion.  Machida is set to face Maurico "Shogun" Rua at UFC 104, and if "Shogun" is victorious, Silva may have a chance to cash in on his impressive win over Jardine and fight for the title.

Here are the rest of the winners and losers, courtesy of Sherdog.com's Fight Finder system: