Brock Lesnar Had a Bad Night at UFC 102

Share All sharing options for: Brock Lesnar Had a Bad Night at UFC 102 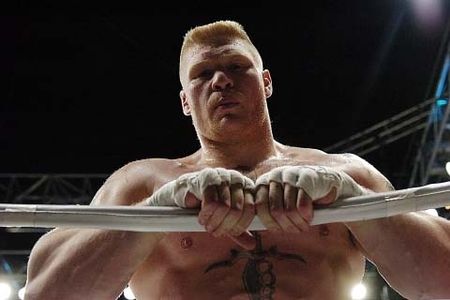 That's right, even though the heavyweight champion didn't fight at UFC 102, he had a pretty bad night.  First, his training partner Chris Tuchscherer had his reproductive organs delivered about three feet north courtesy of a kick to the groin from Gabriel "I Almost Killed Cro Cop" Gonzaga.  After Tuchscherer recovered from the shot, Gonzaga landed a head kick and finished him off on the ground.

Ok, so maybe Brock Lesnar has no feelings and doesn't care too much about what happens to his training partners.  Lesnar decided to give his cage-side advice another shot during the main event and screamed instructions at one-time opponent Randy Couture.  I can't think of a logical reason for Lesnar to help Couture to win... except for the fact that Couture is a much smaller version of Lesnar whereas Nogueira is a more technical stand-up fighter and has the potential to finish the still green Lesnar on the ground.  At the post-fight press conference, Dana White confirmed that Lesnar was rooting for Couture and was even asking for a rematch with Couture if "The Natural" won his bout.  Yeah, if I was Brock Lesnar, I wouldn't want to fight Nogueira either.

Considering the amazing performance that Couture and Nogueira put on, as well as just how dominant Nogueira was in victory, it isn't a stretch to think that Nogueira could be in line to face the winner of Brock Lesnar vs. Shane Carwin.  Fighting Frank Mir, a man who gained his new reputation from beating a sick and injured Nogueira, is not the same as fighting "Minotauro," a man who has handled and submitted bigger men than Brock Lesnar in the past.  Apologies, Brock.