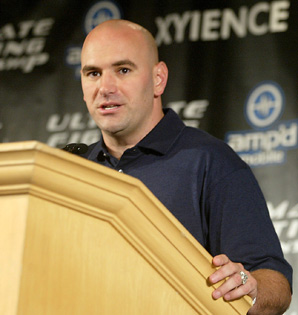 While there had been some speculation from fans that Dana White's YouTube video blogs were deleted due to an upcoming TV deal that might feature similar content, the UFC president explained the decision after the UFC 102 press conference, and Kevin Iole at Yahoo! detailed White's comments.

"Something weird happened to me during the blogging and I just feel that me doing the blogs is not a good thing," White said. "It’s not the right time, with what’s going on in the world right now, to be doing the blogs. Let me put it this way: I’ve been very fortunate and I have a very fortunate life. My life is pretty crazy. Other people aren’t that fortunate. I started getting some pretty crazy letters from people, anywhere from talking about losing their homes to a guy who wrote me a letter talking about what a home means.

"What a home means is that it’s a safe place for you and your family and this guy was losing his house. It just [expletive] me up. It really did. We had this video blog of me jumping on airplanes and doing this crazy [expletive] and I just don’t think it’s the right time for me to be doing video blogs and for people to see the life that I live."