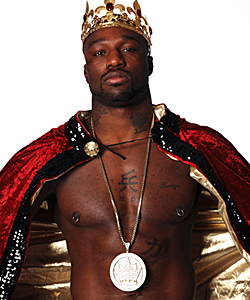 Undefeated prospect Muhammed "King Mo" Lawal ran through his late replacement opponent Mark Kerr at Friday's M-1 Global "Breakthrough" event.  Lawal was originally slated to face off against Don Frye, but Frye pulled out of the fight citing a lack of promotion and professionalism on M-1's part.  Kerr, a UFC and Pride veteran whose career and personal battles were highlighted in the documentary "The Smashing Machine," was considered a heavy underdog in the fight (Lawal was a -1100 favorite).

The two fighters circled for roughly ten seconds before Kerr threw a short leg kick.  Lawal, who was outweighed by nearly 50 pounds, caught the leg and awkwardly slammed Kerr down.  From there, Lawal landed a number of heavy shots while on Kerr's back and Kerr appeared to lose consciousness.  The referee stepped in to stop the fight and Kerr was left laying on his stomach on the mat.  With the win, Lawal improves his record to five wins and zero losses.