Share All sharing options for: Dana White Snatches Another Nogueira as Part of Possible Master Plan 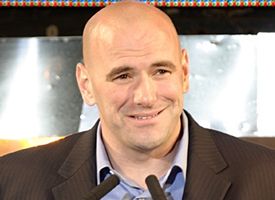 Word that the UFC was picking up Antonio Rogerio Nogueira, the younger brother of former Pride Heavyweight Champion and UFC Interim Heavyweight Champion, surfaced recently, and according to MMA Junkie, Dana White has confirmed that the signing is all but done.  Nogueira will be added to the UFC's ultra-competitive light heavyweight division and, given his career performances, he should fit in quite well.

"It should be done," White said. "If it's not done, somebody's in trouble."

The reason this should be of more interest to MMA fans than other similar signings is that the signing of "Little Nog" comes at a time when the UFC is set on signing a number of other veteran fighters who they have otherwise ignored in the recent past.  Fans have desired the addition of the smaller Nogueira to the UFC for years, but it is only after the entrance of Strikeforce on the UFC's turf that the UFC finally picked up the smaller Nogueira.  Consider the addition of Phil Baroni, a great MMA personality but a questionable

addition to the UFC as far as talent is concerned, as well as the return of Vladamir Matyushenko, who was cut from the UFC in '03 after a knockout loss to Andrei Arlovski, and it looks like the UFC is signing up every available fighter with name recognition.   While a Baroni or a Matyushenko will not likely become UFC champions at this point in their careers, either could have served as headliners in an organization like Strikeforce.