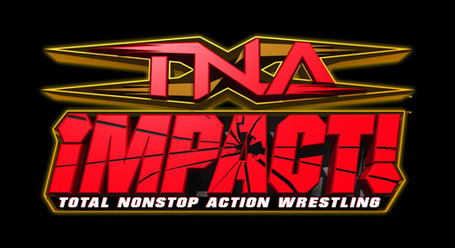 Sting and AJ Styles arrive together in a yellow convertible.  AJ's not retiring, he's got his gear with him and he's ready to work.  Cute Kip offers to park the car but Sting declines.  Kip tells Lauren that he used to have a car like that - when he was over.

Daniels is joining Mike Tenay and Taz at the announcing booth for the opening contest.

Samoa Joe wrestled Suicide to a No Contest

After 3 minutes of back and forth action, D'Angelo Dinero made his way to ringside and Suicide confronted him.  Big cheers for Dinero. Joe and Dinero double teamed him and the referee called for the bell as Daniels entered the fray.  Dave Penzer announced that since the match had gotten out of control, Earl Hebner made the decision to pick up the match later in the night as a tag team match.  Samoa Joe and D'Angelo Dinero vs Suicide and Daniels.

Eric Young guarantees that Hernandez will be joining the World Elite.

The World Elite are in the ring and Abdul Bashir wants to talk about the war in Iraq.  May 4, 2003 Dubya said the war was over, mission accomplished.  If we're no longer at war, what's killing hundreds of his innocent brothers and sisters every day?  The crowd proceeds to answer his question by chanting "USA USA".  Good answer!  Americans are oil junkies.  He then thanks us for our time and Eric Young calls out Hernandez.  How many times has Hernandez worn the colors of his country to the ring?  These people will never respect him, he needs to come home and become Elite.  Hernandez tells him off, the TNA fans are his family.  This is his country, and they can love it or leave it.

Traci and Sharmell vow to bring the Knockouts Tag Championships to the Mafia.

Lauren is taking direction from camera man Alex Shelley.  He asks her to move the mic the mic a little to the left and zooms in on her cleavage.  Dr. Stevie enters with a proposition, if they can take out Abyss, they can make a cool fifty grand.

Traci has enormous breasts.  Sharmell looks amazing for (according to Wikipedia) 36.  Kong hit a big splash but wandered over towards the ropes to jaw jack with Sharmell.  Saeed tagged herself in and scored the pin on Traci.  Taz puts her over as making a smart move but Kong looks upset.

Morgan confronts the Mafia.  Angle says Morgan lacks experience and Morgan alerts him that Dixie is in the Impact Zone.  There's going to be a four way at No Surrender and he's lobbying for a spot.  Morgan knows Angle will have his back and gives him a big hug.  I'm really enjoying the story of Angle and Morgan knowing that they are both bullshitting but still trying to outsmart each other.

Homicide is featured in this month's issue of The Source, the #1 hip hop magazine on the globe.  I was more of a Vibe man myself.

Jessie Neal defeated Rhino after the referee reversed the decision

Rhino is aggressively uninteresting.  After 90 seconds of rudimentary grappling, Rhino gets the win after a spine buster.  Neal struggles to his feet after the pin and Rhino hits him with the gore.  The referee then calls for the bell and reverses the decision, giving the win to Neal.  Rhino throws a couple of kicks and Brother Devon makes the save.

Mick Foley is in his office wearing a distinguished wig.  Presents Abyss with a bag of groceries.  Foley asks him to take it easy on Shelley since his kids are big fans.  ODB and Deaner make their case for who deserves the Knockouts championship.  Deaner took out both Chuck Norris and Mike Tyson.  Foley decides to hold the title up, they'll wrestle at No Surrender for the belt.

The Guns overwhelmed Abyss with their speed, hitting and running.  Sabin went for a springboard splash but was caught with the Black Hole Slam.  Post match, Dr. Stevie dressed down the Guns until they snapped, taking him out with a big hesitation drop kick.  Abyss went to enter the ring to finish the job until Kevin Nash made his way down the ramp.

Abyss stuck his nose into Nash' business at Hard Justice.  At No Surrender, Nash is taking out Abyss and collecting Dr. Stevie's 50 grand bounty.

TNA Knockout will be making her debut tonight taking on Daffney.  Daffney counts sheep every night but never lets them jump the fence.  She catches them, drains their blood, and wears their skin to the supermarket.  Tonight, she'll show Hamada how crazy she really is.

Beginning of Daffney vs Hamada.  Hamada knocks Daffney out of the ring with a big roundhouse kick and they throw to commercial.

Daffney whiffed on chair shot so Hamada wrapped the chair around her neck and slammed her into the ring post.  She then rolled her onto a table and hit a big moonsault to the outside.  Hamada throws her back inside the ring and finishes the job with a Michinoku Driver.  Crowd was going nuts for all this, huge THIS WAS AWESOME CHANTS.  Much like their answer for who's killing The Sheik's family, they were on the money.  Killer match.

The Beautiful People confront Madison Rayne in the locker room.  Throughout this entire segment, Velvet has her breasts a millimeter from Rayne's face.  Rayne costed Angelina Love her title, now she's going to pay.  TBP drew Rayne and her mystery partner in the first round of the TNA Knockout Tag Championships tourney.  They brawled and left her laying.

Beginning of Suicide and Daniels vs Samoa Joe and D'Angelo Dinero

Good action, about all you can do in 3:30 or so.  Finish came when Dinero missed his double knees in the corner (Elijah Experience) and Suicide pinned him with a Oklahoma Roll.

The big interview.  Dixie announces the new three year deal with Spike.  Lashley has a passion for pro wrestling, he wanted to come back but wasn't sure he could do MMA at the same time.  Dixie convinced him in a meeting that he could win his matches in both endeavors.  Lashley wasn't a traditional talent acquisition but an opportunity to try something new.  TNA will be helping to promote his fights to make him the biggest thing in both sports.  Lashley is aiming for the top, he wants the TNA World Heavyweight Championship.  Dixie envisions a belt from each sport on his shoulders.  Lashley makes his PPV debut at No Surrender taking on Rhino.

Main event got decent time, around eight minutes.  Sting wrestled with a shirt on which always makes me a little sad.  Lots of Booker/Sting in this one which was a total time warp.  Hernandez hit a big ass tope on the heels for a huge pop.  Story of the finish was Morgan not trusting his partners.  Steiner came in with a chair and Morgan thought he was the target.  They argued and AJ hit his springboard forearm on Morgan for the win.  Post match, Morgan took out both Steiner and Booker and motioned to Angle that he would be next.

Thoughts: A fine show.  Hamada had a great debut, looked great.  Lots of short matches but I thought it was all pretty good.  Enjoying the Morgan/Angle interplay and their game of Spy vs Spy.  Hernandez is a guy who's been given the ball and is running it right into the end zone.  He'll never be an eloquent speaker or a world class worker but there is something innately likeable about the guy.  Just a fun personality.

Detailed breakdown of what flavor of ramen I'm digging on this week goes here: http://www.twitter.com/crumbley