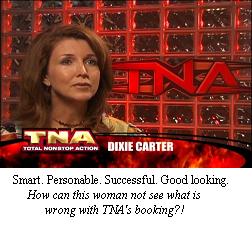 What could Dixie Carter, owner of TNA, have said that would piss off so many veterans in the company?

So Dixie Carter held a meeting backstage last week at the TNA Impact tv taping, announcing TNA's new three year contract with Spike TV. During said meeting, Dixie brought up a few points, which basically sounded like everything a manager type would bring up at any business meeting. Lots of strategery and such. Well, that's also when she said, "I also want to see a little more effort in the ring from some of you." From all reports, she didn't say this pointedly or snidely, just a "pick up the slack" type thing.

If there is one thing you don't tell a 40 year old wrestler about, it's what to do in a ring. Rumor has it that all the veteran types thought that since she didn't have any in-ring experience, only signing-their-checks experience, she had no business telling them how to do their jobs. No one mentioned the fact that most of them would be selling autographs in a flea market somewhere if it wasn't for TNA.