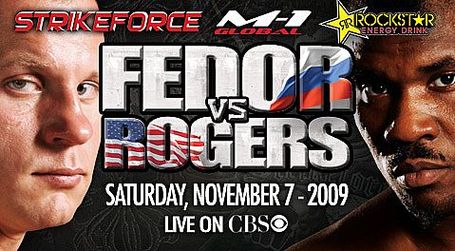 As a resident of Northern California and a fan of grown men punching each other in the face, I have a vested interest in the success of Strikeforce. Watching the promotion grow over the last few years has been an amazing experience. Rather than over extend itself by growing at an accelerated rate, the powers that be at Strikeforce have slowly moved the company along one step at a time. Tomorrow night, Strikeforce takes its biggest step yet by making its prime time debut. Normally a promotion would be sweating bullets the night before a show of this magnitude, and I'm certain there is a level of anxiety being felt by everyone involved with the show. However, when one half of your main event is the #1 heavyweight in the world and the baddest dude on the planet, what do you have to worry about? Fedor is coming to network television. While an unproven PPV draw here in the States, Fedor has a chance to capture the attention of casual fight fans. People who have heard of Fedor but got into MMA post-PRIDE and never watched Affliction will finally get their chance to see him in action against an absolute monster in Brett Rogers. And here's the best part: It's free. The UFC is countering this by throwing together a bunch of main events that have already happened, which is pretty much what they air on Spike every Saturday as it is. Make no mistake about it. The UFC may not view Strikeforce as a competitor yet, but if Scott Coker and company continue to put together quality cards like the one they have planned for tomorrow that will change. Here's a quick rundown of the loaded televised card.

Fedor Emelianenko vs. Brett Rogers
Jason "Mayhem" Miller vs. Jake Shields (for the Strikeforce middleweight title vacated by Cung Le)
Gegard Mousasi vs. Rameau Thierry Sokoudjou (non-title match)
Antonio Silva vs. Fabricio Werdum
My only gripe about the card is the Mousasi/Sokoudjou fight being a non-title affair. Seriously, Strikeforce. This is MMA, not the WWE. Don't waste the fans time with non-title fights. I could see you not wanting to give Sokoudjou a title shot this soon, so why not put Mousasi in there with someone who actually deserves a title shot? They did this crap with Bobby Southworth and Anthony Ruiz, and Ruiz ended up winning by a cut stoppage. So now you have a title holder who lost his last fight, yet still holds the belt. I'm sure there are underlying circumstances as to why the fight is non-title, I just don't like it. That minor complaint aside, this show looks great on paper. We have yet to see Rogers face a real test. How will he respond if/when Fedor gets him to the ground? Can his chin handle a Fedor right? We'll find out tomorrow. Mayhem Miller returns to the U.S. tomorrow and faces Jake Shields for the Strikeforce middleweight title that was vacated (FINALLY) by Cung Le a few months ago in what should be an awesome fight. Gegard Mousasi made his American debut by blitzing right through Babalu Sobral and winning the Strikeforce light heavyweight title back in August. He faces Judo player and father of 14 children Sokoudjou, fresh off an ass whooping of Bob Sapp last month. Mousasi is the overwhelming favorite, but that's why they fight the fights. And in the last scheduled TV fight, disgraced former EliteXC heavyweight champion Antonio "Bigfoot" Silva returns to America for the first time since failing a steroid test in July of 2008. He faces former UFC contender and BJJ ace Fabricio Werdum, who is coming off of a 1st round submission victory over Mike Kyle back in August. This is a show you don't want to miss.