Share All sharing options for: My Totally Fearless (and Clueless) UFC 106 Predictions 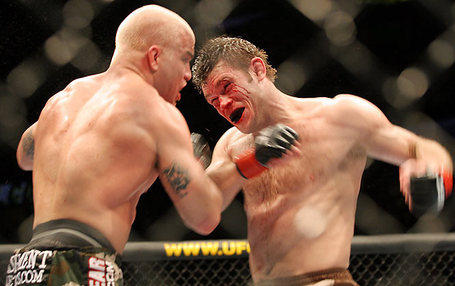 What was at one point a very interesting card headlined by a title match and a fun under card is now a show featuring a main event rematch that the world hasn't really been begging for and a fun under card. Either way you slice it, UFC 106 has the potential to be a good show.

Tito Ortiz makes his return to competition against Forrest Griffin in the rematch of their 2006 brawl that saw Ortiz win by split decision. Griffin is coming off of his monumentally poor performance against Anderson Silva which saw Forrest get completely and totally outclassed before running away from the octagon after the fight. While Forrest is hardly the first guy to look like crap against Silva, this fight will go a long way in telling us where his career is headed. A convincing win against Tito and Forrest likely remains near the top of the card. A loss could send him tumbling. While I'm convinced we'll never see Forrest fighting anywhere other than the UFC, there is going to come a time where his skills will start to erode and he'll have to come to grips with not being what he once was. Has that time already come? I don't believe it has, but coming off back to back loses is a position no fighter likes to find himself in. A win here for Forrest and he silences the doubters for a while. A loss and the murmurs will start getting louder. Tito is in a no-lose situation. Having squashed his beef with Dana, Tito is now in line to get the Chuck Liddell treatment from here on out. The future hall of famer already has a win over Griffin, and a narrow defeat here sets up a rubber match. He's supposedly healthy now following back surgery, and a return to form could have a huge impact on the division. Even a devastating KO isn't the end of the world for Tito, as he'll likely wind up spending the rest of his career fighting cans or fellow members of the light heavyweight over the hill club. Forrest needs this one badly, and it'll be interesting to see how he responds. MY PREDICTION: FORREST BY TKO R2

Johnson comes in after horribly missing weight in his fight last month against the much smaller Yoshiuki Yoshida. Koscheck himself is coming off of his first round demolition against former contender Frank Trigg. If this fight stays standing up Koscheck will get destroyed. If Kos gets it to the ground it'll be his fight to lose. Johnson is bigger and stronger, so I don't see this one going Koscheck's way. MY PREDICTION: JOHNSON BY DECISION
PHIL BARONI VS AMIR SADOLLAH
MMA journeyman Phil Baroni makes his UFC return against The Ultimate Fighter Season 7 winner Amir Sadollah. Sadollah's last fight saw him lose in 29 seconds to Johny Hendricks back in August in a fight that a lot of people think was stopped too early. Early stoppage or not, Amir found himself in a bad position really early in the fight and has a lot of work to do if he wants to stay in the UFC. A loss here and he'll have a seat reserved right next to Mac Danzig on the bus ride to Prelimville. The signing of Baroni was sort of perplexing in that he's not a very good fighter. He hasn't had a big win in almost 4 years, and win here doesn't prove very much other than he was able to beat a guy in his third pro bout. He's about as middle of the road as one can get in MMA. Still, he stands up and throws his hands which always makes him dangerous. This is a make or break moment for Amir. MY PREDICTION: BARONI BY TKO R1
LUIZ CANE VS ANTONIO ROGERIO NOGUEIRA
Cane is currently on a 3 fight winning streak, most recently beating Steve Cantwell by decision back in April. The Brazilian knock out artist will face stiff competition in the form of Little Nog, who is making his UFC debut and has a 5 fight winning streak of his own. The only way Cane wins this is by knocking Minotouro out, something that has happened all of one time in his career. I don't think we're going to be seeing number 2 Saturday night. MY PREDICITION: LITTLE NOG BY SUBMISSION R2
PAULO THIAGO VS JACOB VOLKMAN
The reason this fight is on the main card is due to Karo Parisyan and his ongoing failure to be a normal person, thus robbing the world of another Judo vs BJJ match up. Thanks for nothing, Karo. Thiago is coming off the first loss of his career, a unanimous decision to Jon Fitch back in February. Volkman is making his UFC debut with a perfect 9-0 record. Both men a BJJ aces, and this one figures to be a great ground battle. Still, I'm saddened that I won't be able to see Karo and Hazelett. MY PREDICTION: THIAGO BY TKO R1.
MARCUS DAVIS VS BEN SAUNDERS
Ben Saunders was TKOed by Mike Swick back in June and is guaranteed to have a brawl on his hands with Davis who is also coming off of a June loss. Saunders is much bigger than Davis and if he gets his Thai clinch working Davis is screwed. MY PREDICTION: SAUNDERS BY DECISION
KENDALL GROVE VS JAKE ROSHOLT
Ever since winning The Ultimate Fighter Season Three Kendall Grove has been unable to win a big fight. After dropping a unanimous decision to Ricardo Almeida in August he now finds himself in a similar "must win" position as the one facing Amir Sadollah. He has all the tools and quite frankly should be much better than he is yet, for whatever reason, he can't put it together. He faces former Division I wrestler Jake Rosholt who defeated Chris Leben by arm triangle back in August. Take downs are his specialty and Grove's take down defense is highly suspect after being taken down at will by Almeida. I see another loss for Grove. MY PREDICTION: ROSHOLT BY BORING DECISION
I don't really care enough about the untelevised prelims to make predictions. Sue me.