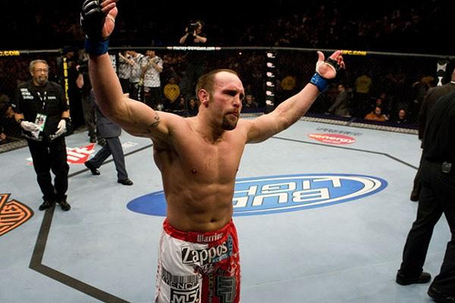 Allow me to preface this post by saying that I am SUPER ULTRA #1 Brock Lesnar fan and would love nothing more than to see him smash each and every opponent into teeny, tiny pieces. Having said that, I totally understand why people hate him. He is an asshole. He is cocky. He seems to believe that he's doing MMA a favor just by being there. He is very easy to hate, and really doesn't give a damn if you love him or hate him. He fights for the money and nothing else. That's what makes these comments from Shane Carwin's blog that much more stunning.

I am sure most of you know I am not the leader of the Lesnar Fan Club. That being said, antics or not, he is OUR UFC HWT Champion. He beat a future Hall of Famer to keep that belt and he NEEDS our prayers and good thoughts right now ... Brock has a wife, kid, and friends that depend on him to make their lives better. You do not have to support Brock and his antics but you should have respect for the human side of what is happening here.  Talk of stripping a man of his title due to illness will set this sport back farther then anything Brock has ever said. We need our Champions healthy and defending. I know the show will go on but to be a Champion you must beat a Champion ... If you sit around bashing Brock or making fun of this because of his antics you might be the very same thing you despise. As an MMA fan, as a human be concerned that one of OUR OWN has fallen and needs our support.

Other than Brock, the person whose career is being impacted by this situation is Carwin. Undefeated and with a head full of momentum, a win over Brock would have meant a lot more money in his pocket, not to mention the affection of legions of fans who want to see Lesnar humbled. For him to take the high road here and offer Brock and his family support and warm thoughts speaks highly to his character. It's nice to see sportsmanship like this. Too bad Brock probably doesn't give a damn.