I'm heading out of town for the weekend so here is a Triple Shot of Monster Madness for your viewing pleasure! 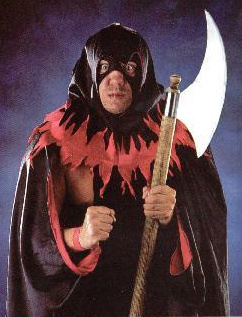 Terry Gordy goes down in history as one of the greatest big men to ever step in the ring. As part of the Freebirds he was a part of one of the greatest feuds ever with the Von Erich family. He and Steve Williams tore up the tag team wrestling scene in Japan. Then he ODed on pain pills, suffered brain damage and ended up in the WWF wearing a mask and carrying a plastic axe. He feuded with the Undertaker but didn't hang around very long and passed away far too young at the age of 40. His son Ray is better known to us as Smackdown's Slam Master J. I couldn't find any of his WWF matches, so here's some footage of him attacking the Undertaker. 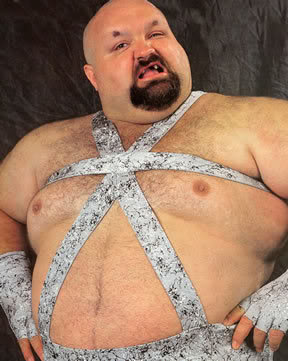 This won't be the last time you see Mike Shaw on this list. Poor guy, he wasn't a bad worker for a really fat dude. He just couldn't catch a break gimmick wise. The gist of the Bastion Booger character was that he was a fat, disgusting slob with ill-fitting ring attire and a gross finisher where he pretty much teabagged his opponent. Don't believe me? Check it out for yourself, along with a couple other of his matches.

Billy Jack Haynes was the first wrestler I ever got to meet as a kid, so I always have a place in my heart for him. He was pretty good in the ring for a big roided up monster and always had great energy. Unfortunately for him, his gimmick was being from Oregon. I know a few people from Oregon, and they don't exactly go around advertising it. So after being fired or quitting (depending on which of his shoot interviews you listen to) Billy ended up in WCW where he took on the persona of Black Blood, a French executioner hailing from "a little town in France". He had some pretty good matches but ultimately ended up self destructing and now spends his days and money at the dog track. Seriously. Here's a lumberjack match between him and Big Josh (Matt Bourne aka the original Doink the Clown), which is a match between two of my all time favorites doing crappy gimmicks. Check out Bischoff doing the backstage interview. Have a good weekend.