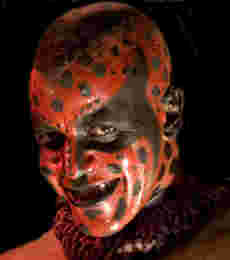 The first time I saw The Boogeyman show up on WWE programming I desperately wanted him to be awesome in the ring. First off, back when Tough Enough was still a thing he lied about his age to get into the competition. He wanted nothing more than to be a wrestler. Then, years later he made it. His gimmick was so different from anything else in recent memory. The missing teeth, the face paint, the dancing, smashing the alarm clock over his head, it was all completely and totally insane. Then they put him in the ring and it was obvious that he was not very good at wrestling. You see, even with an awesome gimmick there is still a certain level of in-ring skill that is needed to make a wrestler stick. Boogey just wasn't good enough. Also, he was like 42 when he debuted. So all things considered, the fact that Boogey got such a late start in wrestling and still managed to stick around for a couple of years despite not being very good at his chosen profession should count for something, right? So here's a couple of Boogeyman's more entertaining moments. Have fun.