The end of the road is rapidly approaching for Cageside Seats Monster Month. Who comes in at #'s 5 and 4 on our list of the top monsters in the history of professional wrestling? 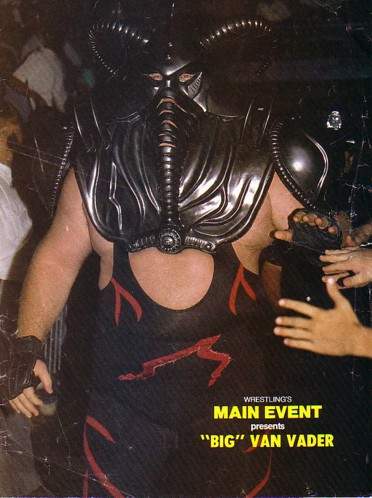 Never has there been a big man who combined the skill, strength, intimidation and versatility of "The Man Known as Vader". After washing out as professional football player, Leon White set out on a path that would make him one of the most recognizable men to ever enter a pro wrestling ring. Stiff, ruthless and downright scary, he was known as one of the toughest men in the history of wrestling. Breaking into the business by getting beat up by Bruiser Brody night in and night out will have that affect on a person. At 6'5 and over 400lbs. he was one of the rare big guys who could go out there with any kind of opponent and have a great match regardless of their style or size. Everything Vader did had such an awesome impact. Combine all of that with promo skills that made you afraid that he'd reach through the TV screen and choke you and toss in the occasional moonsault and you have the perfect big man. He feuded with nearly every big name of the 80's and 90's both in the U.S. and Japan. Enjoy a Vader tribute video put together by Victator as well as nice little match between Vader and Bret Hart. 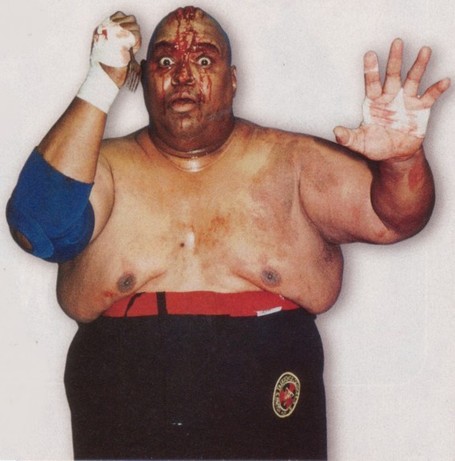 Debuting in 1958, Abdullah the Butcher has been terrorizing fans for a mind bending FIFTY PLUS YEARS. Think about that for moment. Fifty freaking years. Granted, the last twenty or so haven't been full time, but how many 450lbs. 68 year olds do you know of who are capable of going out and putting on a nice little garbage brawl? Although billed as being from the Sudan, Abby actually hails from Canada. With a forehead scarred from countless chairshots, razor blades, forks and anything else that can pierce skin, Abby has a set of grooves in his forehead that are so deep that he is known to freak out fellow casino gamblers by stuffing poker chips in them. Abby is on record as saying that he will remain semi active till the day he dies and I see no reason why he shouldn't. He owns a restaurant in Atlanta called "Abdullah the Butcher's House of Ribs and Chinese Food", which gives me an actual reason to one visit Atlanta. I present to you both parts of the epic WCW car wreck known as "The Chamber of Horrors", of which Abby is a huge part. This is seriously so bad that it is amazing.